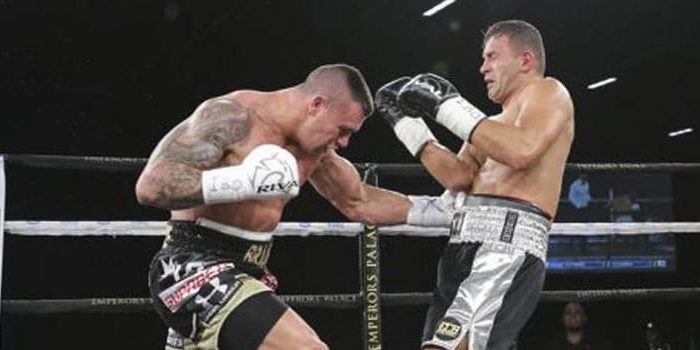 In what was a farcical fight for a world title fight and in one of the poorest performances by a foreign fighter in South Africa in many years, Sefen Seferi from Albania was stopped in the third round by South Africa’s Kevin Lerena, who retained his IBO cruiserweight belt for the fifth time, at Emperors Palace near Kempton Park on Saturday night.

All credit to Lerena (90.20kg) who came out aggressively at the opening bell but in reality there was little response from Seferi (89.30kg) who fought with his gloves held up to face as he pushed out some tentative lefts and rights that missed the champion.

This was the same pattern in the second round and when Lerena stepped up the pace in round three there was little response from Seferi and the only time he showed any form of aggression in the fight was when he complained bitterly to the referee that Lerena had hit him behind the head,

In the third round, the superbly conditioned Lerena (24-1, 11 KOs) landed a glancing southpaw left hand blow the side of the head that sent Seferi to his knees.

Referee Jean Robert Laine from Monte Carlo picked up the count and then waved the fight off without the completing the count at 2 minutes 30 seconds into the round.

Even though the challenger did not appear to be in any distress or hurt, he seemed reluctant to continue.

The 40-year-old Seferi (23-3-1, 21 KOs) had an impressive record on paper and much more was expected of him even though he had been fighting opponents with more losses than wins on their record.

In a closely fought 12 rounder WBA Pan African junior-welterweight champion Jabulani Makhense (63.50kg) added the IBF Africa junior welterweight title to his collection when he beat Marios Matamba (63.30kg) from the DRC on a majority decision.

Lebo Mashitoa (87.05kg) who fights from the southpaw stance won the vacant Gauteng cruiserweight title on a ten round split decision over Keaton Gomes (89.80kg).