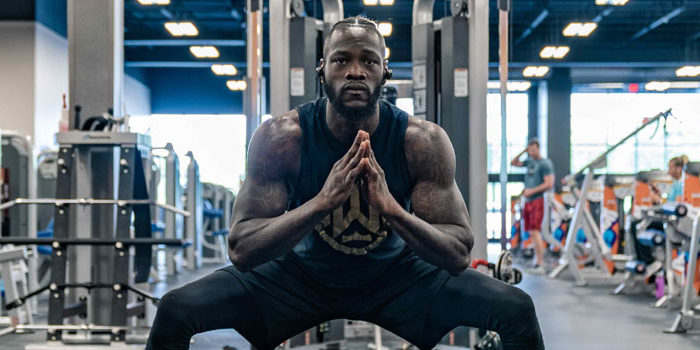 From vacationing in the Caribbean to being mobbed in the UK, it’s been an eventful summer for Deontay Wilder. Or as one notable New Orleans poet might put it, the WBC World Heavyweight Champion has been enjoying the fruits of his labor while they’re still ripe.

But even during these times of leisure, Wilder was on his grind, acting as an ambassador for boxing and for CHIVA Africa, an organization that helps children and adolescents living with HIV in Africa receive proper health care.

“I’m heavyweight champion of the world which means I have a great work to do,” Wilder said. “I understand the influence I have and it’s a great responsibility. I accept it with open arms.”

“The Bronze Bomber” takes everything he does seriously—even the chores at home in his native Tuscaloosa which he plans to pass on to his children once they’re of age.

“Growing up in Alabama, my father made every weekend a time for spring cleaning,” Wilder cracked. “It’s like a survival skill right now. I mean, I have people that do certain things but I still come out and pressure wash my patio, the outside, clean the pool side. It’s been instilled in me.”

As Wilder works around the house, his mind is on another task. Now 33 years old, boxing’s longest reigning heavyweight champion—and its most feared puncher—is entering the back nine of his pro career. Solidifying his legacy is paramount. Naturally, he wants to do it in style.

“There hasn’t been an undisputed champion since Lennox Lewis,” Wilder said. “I could be undefeated and undisputed, with pretty much all knockouts. That’s something we’ve never seen before. That would be a hard act to follow right there.”

But first Wilder, 41-0-1 (40 KOs), has unfinished business with two prior opponents. In March 2018, he and Luis Ortiz engaged in a thrilling back and forth at Brooklyn’s Barclays Center. Wilder overcame near disaster in the seventh round to put Ortiz away in the tenth.

That December, Wilder and undefeated former unified champion Tyson Fury fought to a split draw in a fight that entered mainstream consciousness. Fury outboxed Wilder for large stretches but Wilder, ever the playmaker, dropped him once in the ninth and nearly ended the bout with another knockdown in the dramatic twelfth.

The immediate rematch didn’t materialize when Fury pulled out, leaving Wilder to face mandatory challenger and rival, Dominic Breazeale. Nevertheless, the Ortiz and Fury fights forced Wilder to examine certain habits that had creeped up over the years, habits he typically got away with because of his athleticism.

“Sometimes as a champion, you have the title for so long you can start losing your fundamentals,” Wilder admitted. “Having that power can make you complacent. I had to go back and work on things.”

Like making sure he was eating and resting properly. After weighing a little over 214-pounds versus Ortiz and 212.5 against Fury—his lowest weights in 11 years—Wilder enlisted the help of a nutritionist.

“If you want to put a number on it, I’d like to see Deontay weigh anywhere between 224 and 232,” said long-time trainer Jay Deas on The PBC Podcast. “He already punches harder than just about anyone in history and I think [the extra weight] only adds to it. And I know when he’s getting proper rest, nutrition and hydration, it makes him more agile, more fluid, more speed…everything gets better.

“During camp for Breazeale, every single little thing we saw, we corrected; if his hand or feet were an inch out of place. We really zeroed in on those things because at the top level, everybody does the big things right. It’s those small tiny minute details that make a difference.”

Wilder came in at 223.5-pounds versus Breazeale. And then he flattened the durable contender with a single right in the first.

Next up is a rematch versus Ortiz. If Wilder wins, he’s agreed to face Fury next. “The Gypsy King” recently won a tougher-than-expected decision over Otto Wallin, suffering a gaping cut over his right eye that required 47 stitches.

Wilder was unimpressed, by both Fury’s performance and his drawing power.

“Look at his two fights since we fought. His people messed up thinking he sold our pay-per-view. Nobody is coming to see Fury fight. First, he came into the ring with an American robe. Then he’s got a Mexican outfit. Tomorrow he’s Irish. What he is really is a clown.

“He just gotta heal up and get ready because I’m a knock him out again. It might be the end of his career. That’s for later. Right now, my focus is on Ortiz. I have to handle business with him first.”

The Cuban has won three straight since the Wilder fight. Yet some question if he is still elite at age 40, while others believe he could derail the Fury rematch.

“Ortiz is one of the best,” Wilder declared. “That’s why none of the top guys have fought him yet. Their excuse is ‘he’s old.’ Well then beat his old ass and get him out. That’s what I’m going to do. I’m a knock him out again.

“These dudes don’t want to fight this so-called old man because he’s very skillful. He’s a southpaw who can box. He’s experienced. And he hits hard. They don’t want to mess with that combination. They can make the excuse that he’s old all day long. I ain’t buying that because I done been in the ring with him.”

Wilder’s target weight for the Ortiz bout is 230-pounds—and he’s targeting an early KO. A win here would be his 10th title defense, moving him into a tie with Muhammad Ali at fifth place for most consecutive heavyweight title defenses. Quiet as kept, Wilder is placing his name among the greats in the record books. And he’s done it the only way he knows how: putting in the work.

“When I think about boxing, the first name that pops in my head is Ali,” Wilder said. “When I go, people are gonna love and remember me. I want them to say, ‘Damn, Deontay Wilder is the best ever.’ And that’s what I’m going to be. Facts.”