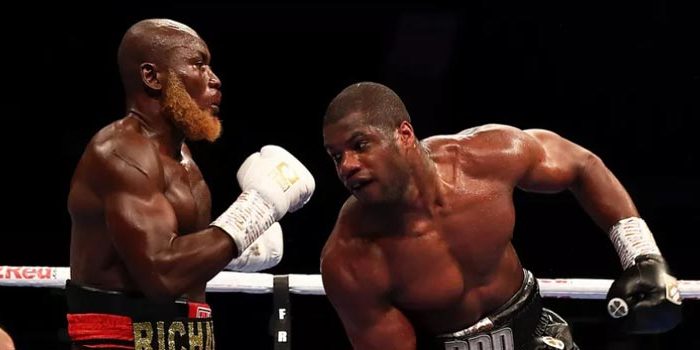 Unbeaten Daniel Dubois (12-0, 11 KOs) will be fighting Ghana’s Ebenezer Tetteh (19-0, 16 KOs) for the vacant Commonwealth heavyweight title on BT Sport on September 27 at the Royal Albert Hall in London, England. Dubois, 21, and Tetteh will be fighting for the strap recently vacated by Joe Joyce.

Dubois and Tetteh were ordered to face each other. However, Joyce (10-0, 9 KOs) is the guy that the 6’5″ Dubois wanted to fight, but the 2016 Olympic silver medalist isn’t interested in fighting him.

Joyce wants to fight top contenders in order to move up the world level rankings. #11 WBO Dubois is a fringe contender at this point in his young two-year pro career, and he’s not ranked high enough to give the unbeaten Joyce a push up the world rankings if he were to beat him.

“I think there was a lot of attention around the Gorman fight, and I think a lot more people around the boxing are starting to recognize me,” said Dubois to IFL TV. “And I love being the underdog, and I love proving doubters wrong. I think it’s for the Commonwealth title,” Dubois said about his fight against the 31-year-old Tetteh. “It’s a step in the right direction for me. I want to see in the coming weeks more about this guy, and what he brings to the table,” said Dubois.

It’s debatable whether Tetteh is a good opponent for Dubois to move his career in the right direction. Few boxing fans have ever heard of Tetteh, and he’s not ranked in the top 15 at the world level. As such, Dubois would be better off forgetting about wasting time fighting unknowns like Tetteh, and and focus more on facing contenders.

What we don’t want to see is Dubois waste 10 years of his career the way Kell Brook did before he fights for a world title the first time. Tetteh would have been a good option for Dubois in the first two or three fights of his career, but not now after his impressive fifth round knockout win over Nathan Gorman last July. Tetteh is a big step down from Gorman for Dubois, and that’s obvious. The reality is, Dubois isn’t progressing with the Tetteh fight; he’s regressing.