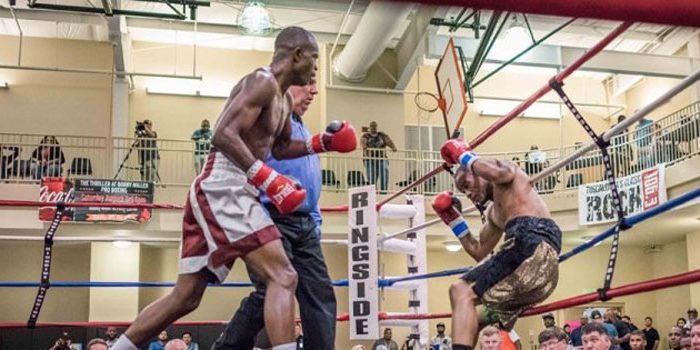 The 36-year-old Indongo, who is from Windhoek, Namibia, was fighting for the first time his knockout loss to unbeaten Regis Prograis on Mar. 9 of last year. Prior to the loss to Prograis in August of 2017, Indongo was knocked out in round three by Terence Crawford, who would become the undisputed junior welterweight champion with the win.

Indongo weighed 141.2 pounds for his clash against Jones.

From the opening bell, Indongo was methodical, looking to counter Jones, who connected on a few punches that had Indongo holding on. Jones pressed the action in round two, but a counter right hook from the southpaw Indongo staggered Jones, who went down moments later from a barrage of punches.

Jones beat the count, but referee Jeff Dodson waved the fight off at 1:12.

The 32-year-old Jones, who resides in Fayetteville, Georgia, drops to 4-2.

Alfonso, who is originally from Cuba and now resides in Orlando, Florida, walked down the defensive-minded Lyons from the opening bell, finally connecting with several punches in round three. After the round ended, Lyons decided to remain on his stool.

In what turned out to be the fight of the night, cruiserweights Arturo Aguilar and Chris Polk fought to a majority-decision draw.

Aguilar (2-0-1, 2 KOs), who is originally from Guerrero, Mexico and now resides in Birmingham, Alabama, fought toe-to-toe against Polk, throwing hooks and crosses for most of the fight.

In an upset on paper, middleweight Rick Graham (7-23-4, 2 KOs) of Houston defeated Tuscaloosa’s Thomas Knox by split-decision over six rounds. Knox suffers his first loss as a pro and falls to 5-1-1, 3 KOs.