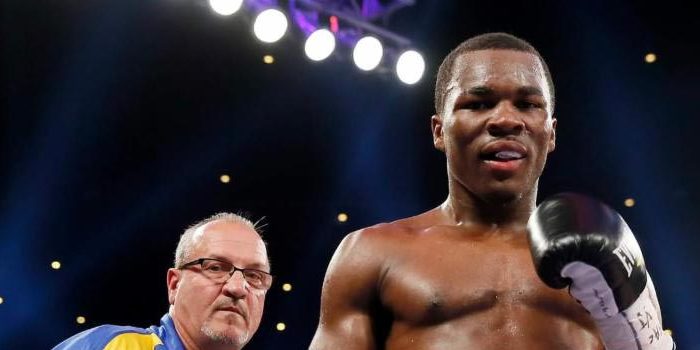 On Thursday, August 29, DiBella Entertainment’s Broadway Boxing series will return to Foxwoods Resort Casino, in Mashantucket, CT, with a loaded card headlined by Toka Kahn Clary taking on Irvin Gonzalez in a 10-round super featherweight contest.

Tickets for the Broadway Boxing event, presented by Nissan of Queens, Azad Watches, OPTYX, Christos Steak House and Gagliardi Insurance, are priced at $125, $75 and $45, and can be purchased online at Foxwoods.com, Ticketmaster.com, by calling 800-200-2882, or visiting the Foxwoods box office. Foxwoods Resort Casino is located at 350 Trolley Line Boulevard, Mashantucket, Connecticut 06338. Doors will open to the Fox Theater at 6:30 p.m., with the first fight scheduled for 7:30 p.m.

New England super featherweights Toka “T Nice” Kahn Clary (26-2, 18 KOs), of Providence, RI, and Irvin Gonzalez (12-1, 9 KOs), of Worcester, MA, will clash in the 10-round main event. Victorious in seven of his last eight starts, the 27-year-old Clary, a native of Liberia, returns following a fifth-round knockout of Carlos Manuel Reyes on May 17, also at Foxwoods Resort Casino. Prior to the Reyes stoppage, Clary lost a hotly contested 12-round unanimous decision to world ranked and undefeated contender Kid Galahad on October 20, 2018, in Boston, MA. Unbeaten through his first 12 fights as a professional, the 23-year-old Gonzalez is looking to rebound from his only loss to Elijah Pierce on May 17.

In a 10-round women’s world championship bout, Alicia “The Empress” Napoleon-Espinosa (11-1, 6 KOs), of Lindenhurst, NY, will defend her WBA super middleweight world title against undefeated contender Shemelle Baldwin (3-0-1, 2 KOs), of Newark, DE. Napoleon-Espinosa will be making the second defense of her world title that she captured on March 3, 2018, with a 10-round decision versus previously undefeated Femke Hermans in front of her legion of fans at Barclays Center in Brooklyn, NY. She followed that with a 10-round world title defense against Hannah Rankin on August 4, 2018, at Nassau Coliseum in Uniondale, NY. Napoleon-Espinosa began 2019 with a second-round knockout of Eva Bajic on April 10, in New York City. Before turning pro in November 2017, Baldwin was a Washington D.C. Golden Gloves champion, a three-time Pennsylvania Golden Gloves champion, and a 2015 Olympic Trials semi-finalist.

Undefeated heavyweight Stephan “Big Shot” Shaw (11-0, 8 KOs), of St. Louis, MO, will square off against southpaw Johnnie Langston (7-1, 3 KOs), of Sarasota, FL, in an eight-round contest. The 6’4″ Shaw is determined to keep up the momentum from his last two impressive knockout victories against Aaron Chavers last October and Donovan Dennis in March. Following a stellar amateur career that included 2013 PAL and USA National Championships titles, Shaw turned professional in December 2013. Langston will seek to return to the win column following a majority decision loss to Lyubomyr Pinchuk in July.

Fazliddin Meliboev, a 22-year-old from Kokand, Uzbekistan, co-promoted by DiBella Entertainment and Fight Promotions Inc., will make his pro debut in a six-round bout. The southpaw Meliboev was an amateur star who was an Uzbekistan National champion in 2015. He won silver medals at the 2017 Great Silk Way Tournament in Baku, Azerbaijan, and the 2016 Chinggis Khan Cup in Ulaanbaatar, Mongolia, and a bronze medal at the 2014 Asian Youth Boxing Championships in Bangkok, Thailand. He also participated in the World Series of Boxing, winning all three of his bouts.

Southpaw junior middleweight prospect Hurshidbek “Hershey” Normatov (8-0, 3 KOs), of Andijan, Uzbekistan, and now based in Brooklyn, NY, will compete in his first eight-rounder. He has defeated two previously unbeaten prospects in Alexis Gaytan and Nicklaus Flaz and, in his last fight, decisioned 9-1-1 Calvin Metcalf on April 10. As an amateur, Normatov accumulated a 190-40 record and won the European Amateur National Championships in 2014.