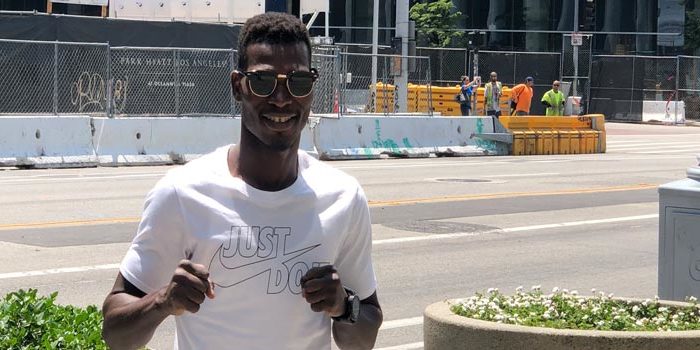 Among the exclusive group of Ghanaian world title holders, Dogboe enjoyed the shortest reign of just eight months at the top after losing his WBO super bantamweight crown in only his second title defence last December in New York.

However, 31-year-old Commey is aiming to become a dominant force and even unify his division. In fact, but for a hand injury sustained en route to knocking out Chaniev, the IBF champion would have been gearing up for a unification bout against the feared WBO and WBA lightweight champion, Vasyl Lomachenko, in Los Angeles in two months.

Asked if he planned to hold on to the title for a long time, Commey was unequivocal about his plans.

“Yeah. I want to reign for long,” he told the Graphic Sports in an exclusive interview after his triumphant return to Ghana last week.

“I am very happy to have achieved my dream and I expect this to be the first of many to come from me. It is a great feeling and I think the training camp I had did a lot for me. I was training and sparring with world champions such as Danny Jacobs and Sadam Ali, among others, and this helped me a lot in my victory against Chaniev,” he explained.

Commey, who arrived to a rousing welcome at the Kotoka International Airport last Thursday, attributed his splendid performance against the Russian to an intense training under the tutelage of his American trainer, Andre Rozier.

He revealed to the Graphic Sports that sparring with tough boxers such as Danny Jacobs and Sadam Ali in the same camp placed him in good condition in his fight against Chaniev.

Good things come to those who wait. It has been a long journey to world title glory for the Ghanaian who had to endure a controversial loss in his first attempt at the IBF crown against Robert Easter Jr in 2016.

After working his way back to contention again last year, Commey had to endure the frustration of waiting for a unification fight between his former conqueror Easter Jr and Mikey Garcia. Despite winning the unification bout, Garcia opted to relinquish the IBF title than to fight the Ghanaian. The title thus became vacant to be contested between Commey and Chaniev.

When asked whether he would welcome a rematch fight with Easter Jr whom he lost a controversial split decision to in his maiden world title fight at some time, Commey (28-2, 24 KOs) explained that it was obvious the American avoided fighting him and wasn’t focused on him.

“He wasn’t ready to fight me because he knew I was robbed for him to become a world champion. I don’t want to be focused on him now,” Commey noted.