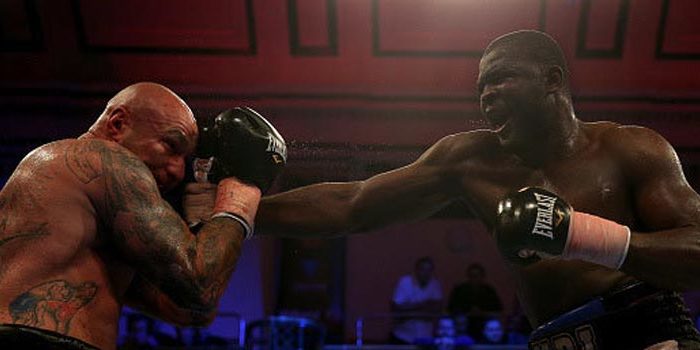 AIRDRIE is not the usual home of an African heavyweight. Not least the son of a tribal leader from the Democratic Republic of Congo. The Scottish town is not where you’d expect to find one of the most exciting prospects in the heavyweight division either. But that is where Martin Bakole is based with Scottish trainer Billy Nelson as they plot their route to the top of the world.

“It’s a long story,” Bakole says with a chuckle when asked how he ended up there.

“I came here to watch my brother against Tony Bellew,” he added.

Bakole’s brother Ilunga Makabu, the heir to their father’s throne as leader of the Kananga province, was the fighter Bellew brutally knocked out at Goodison Park to win the WBC cruiserweight title in 2016.

“I had a six-month visa so I decided to stay here in the UK and train,” said Bakole, whose father and grandfather were also boxers.

“I asked trainer Johnny Roye if I could train with him in Preston.

“I was having problem with finding sparring partners. Scottish coach Billy Nelson asked me to come to Scotland to spar a cruiserweight, Stephen Simmons

“Billy gave me a gift of gloves and gave me is number, telling me if I ever needed anything to give him a call.

“My visa expired so I went back home. I was back home as a free agent. I wasn’t sure what to do.

“I decided to call Billy to ask if we can work together.

“It’s very different. If I didn’t like it I would ask him to go back home!”

Nelson, who helped Ricky Burns to world titles, has struck up a good relationship with Bakole and has predicted he will go all the way to win a world title.

Bakole is also promoted by Barry McGuigan’s Cylone Promotions and the former featherweight champion could not speak more highly of him.

The Congolese bruiser takes the next step on the ladder when he faces American Michael Hunter, whose only defeat came to cruiserweight king Oleksandr Usyk, at York Hall on October 13.

It is the big opponent that I’m looking for,” said Bakole.

“I’m coming from Africa so people don’t know me, so I need a big fight to let everyone know who is Martin Bakole.

“I have to prove to myself what I can do but also for my coach who has told people how good I am. I’m ready for the world title fights now.”

Bakole v Hunter is live on Channel 5 on October 13.