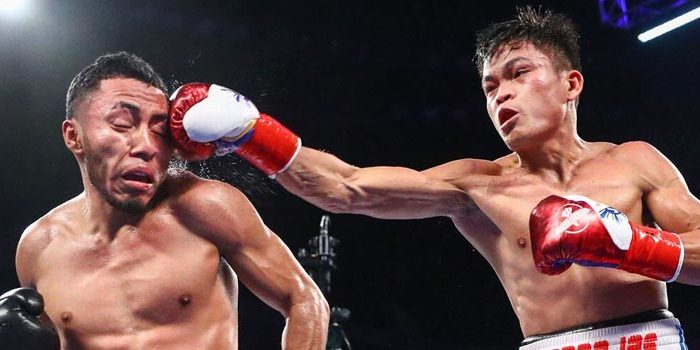 Coming in, Santiago was coming off a split drawl with undefeated Jose Martinez from back in March. They also fought to a draw in November of 2016.

Ancjas, who captured his world title in September 2016, has been very active. This was his third fight of the year – after stopping Israel Gonzalez in ten rounds in February and then won a twelve round unanimous decision over countryman Jonas Sultan in May.

Ancajas took control from the very first round, by pushing Santiago back, working a good jab and landing hard punches.

At the end of the second, the two fighters traded punches in toe to toe fashion with Santiago landing some solid punches. Ancajas had control in the third and fourth, but Santiago was a live dog and landing good punches in spots.

Santiago continued to land accurate rights, and even lefts on Ancajas in the fifth. Things were still close in the sixth, with Santiago’s style making things tough for Ancajas. In the seventh, Ancajas found his distance and timing, and was getting off with accurate punches.

The action continued to play out in a very close manner in the eight and ninth. Both landed accurate shots in the tenth, from comfortable distances. In a close eleventh, the right eye of Ancajas was swelling and he got stunned in the final minute.

In the twelfth and final round, Santiago was making it a high contract fight, as they were trading punches and Santiago was getting the better of the exchanges until the final bell.

The ring return was initially set down as the first defense for Uzcategui, who picked up the IBF interim-title when he stopped Olympian Andre Dirrell in the eight round back in March.

He was going to fight then world champion James DeGale in a mandatory fight. DeGale withdrew and the sanctioning body made Uzcategui the full champion. Then, Uzcategui was set to face mandatory challenger Caleb Plant. That fight also fell out, when Plant withdrew with an injury.

Maderna, who came in as a late replacement, won three of his last five. He was knocked out in four rounds by current IBF light heavyweight champion Artur Beterbiev in June of 2016. And he lost a ten round split decision to journeyman Martin Rios in February of 2017. He’s won his last two bouts by decision.

There wasn’t a lot of action and the local fans booed often.

The heavy hands of Uzcategui were apparent in the very first round. He was pushing Maderna back and throwing some big combinations. After controlling the second round, Uzcategui began to do damage in the third round with big punches to the head and body.

In the fourth, Maderna landed a hard left hook – and Uzcategui took it and continued to come forward with big shots. More of the same in the sixth, with Uzcategui taking his shots and coming forward with more combinations.

Uzcategui began to steps things up in the sixth, applying more pressure and throwing hard punches. More of the same in the seventh, with Maderan shaking his right hand at one point – as if it was injured.

More of the same in the seventh and eight, with Uzcategui controlling most of the action with Maderna just not doing that much. At the start of the ninth, Uzcategui came out firing with Maderna barely doing much of anything to pose a threat. And the tenth and final round was a mirror image of the ninth.

Ramos (30-5, 14 KOs), 31, of Los Angeles and a former World Boxing Association (WBA) super bantamweight champion, dominated the fight and dropped Olea (13-6-2, 5  KOs) in the first round with a tremendous left uppercut.

Ramos was supposed to fight former world champion Jessie Magdaleno, who pulled out of the fight a couple of weeks ago. Top Rank was able to keep Ramos on the card and he deliver an entertaining fight against Olea who was competitive.

Ramos is currently ranked #13 by the WBA at 122 pounds and keeps his path towards landing another title shot.

Askhat Ualikhanov had all he could handle in winning a six round unanimous decision over Angel Hernandez. The scores were 59-55, 58-56, 58-56.