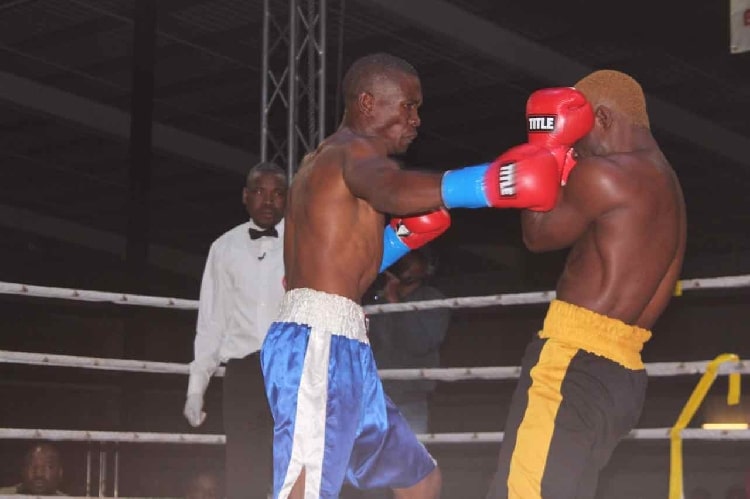 Maemu made his intentions clear of winning the lucrative belt in round one, controlling the fight although he was a little bit cautious as he was still studying his opponent

In round four Andeleki did not let his opponent to have a field day on him, as it was evident that he was now composed and his intension was to take the battle to the War Child, but alas that was not to be as he in return unleashed heavy punches on the Namibian.

In round six the South African showed his true colours applying all the boxing techniques in the event producing good movements and combinations.

At the end of round 12, it was evident even before the judges announced their results that Maemu had taken the belt home, and he claimed the WBA Pan African Featherweight championship with 117-111, 118-111, and 118-110 from the three judges.

Maemu said in an interview that, he was happy that he was crowned the WBA Pan African Featherweight champion.

He said he enjoyed the fight, adding that his opponent was strong although he was not worried about his power. On the day, as his eyes were more focused on winning the title.

“You know to be honest with know, I expected to win the title. I am a fighter I am not the same with other boxers because I am someone who want to finish very quickly. I could have knocked my opponent out but, today I wanted to relax, and I took the fight as a practice session,” he said.

Furthermore, he said he had been in the boxing industry for some time, therefore every time when he enters the ring his main focus is always aiming to achieve something.

The African Boxing Union Featherweight champion said his second belt of WBA Pan African Featherweight title elevates him to another level in his career.

For his part, Andeleki said his ambition was to win the belt, adding that he tried his level best .

He said if given a rematch he can outclass his opponents given that he managed to read his moves although it was too late for him.

In the WBA Pan African Lightweight, South African Ayanda Nkosi was crowned the new champion after beating his country man Jeffery Magagane with split decision of113-115, 115-113, and 115-113.