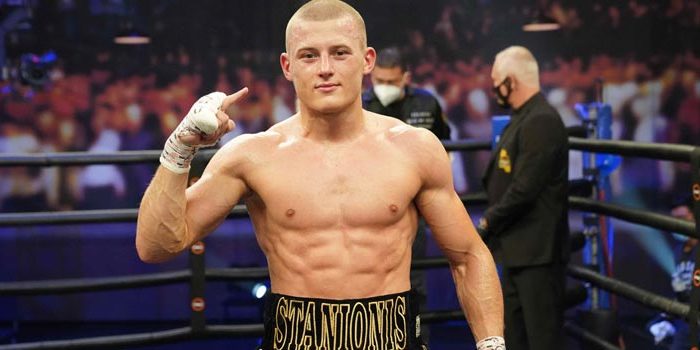 BoxingScene.com has confirmed that a date and location was finalized for Ortiz’s mandatory challenge of WBA ‘Regular’ welterweight titlist Eimantas Stanionis. The highly anticipated clash will take place March 18 on DAZN from a venue to be determined in the Dallas-Fort Worth metropolitan area, minutes from Ortiz’s hometown of Grand Prairie, Texas.

ESPN.com’s Mike Coppinger was the first to report the fight date.

The ordered secondary WBA title fight was secured by Golden Boy Promotions through a December 12 purse bid hearing held during the WBA Centennial convention in Orlando, Florida. Golden Boy—Ortiz’s promoter—submitted $2,300,000, edging out TGB Promotions ($2,100,100) who has promoted the majority of Stanionis’ bouts since he turned pro after representing Lithuania in the 2016 Rio Olympics.

Current purse bid terms call for Stanionis to earn 75 percent—$1,725,000—of the bid as the defending titleholder. The remaining 25 percent will go to Ortiz (19-0, 19KOs), though the unbeaten Texan is believed to receive compensation beyond the $575,000 balance from the purse bid.

The bout will mark his first defense of the secondary WBA belt for Stanionis, who dethroned unbeaten Radzhab Butaev via twelve-round decision last April 16 in Arlington, Texas. The fight came on the Errol Spence-Yordenis Ugas undercard, a main event made possible after Stanionis agreed to stand down from a due shot at Ugas who held the WBA ‘Super’ welterweight title.

The waiting game continued for Stanionis (14-0, 9KOs), whose career was placed on hold while Spence—the reigning WBC/WBA ‘Super/IBF champ—sought an undisputed welterweight championship clash versus WBO titlist Terence Crawford (39-0, 30KOs). He sought to have the WBA enforce his overdue shot at the main crown once Spence-Crawford talks collapsed.

Instead, a joint ruling called for the WBC mandatory challenger to go first in the rotation which paved a path for Spence to next face former unified titlist Keith Thurman. A date is not yet revealed for the fight, as Spence (28-0, 22KOs) continues to recover from a minor injury sustained as the victim of a December 10 car accident in his Desoto, Texas hometown.

Meanwhile, Stanionis heads to the greater Dallas area for his second straight fight versus an area favorite.

Ortiz fights in his home region for the fourth straight time and fifth overall as a headlining act. The 24-year-old contender claimed his mandatory challenger position following a ninth-round knockout of England’s Michael McKinson. Their August 13 clash of unbeaten welterweights took place at Dickies Arena in Fort Worth..

Golden Boy and Mirigian successfully lobbied for the fight to be sanctioned as a WBA title eliminator. The request was approved, at the time of the belief that Spence-Crawford would happen and which would leave the Stanionis-Ortiz winner to challenge for the undisputed crown.

There is now a greater chance of the March 18 winner retroactively receiving an upgrade to full title status. It remains unclear if Spence will finish out the year at welterweight, and whether he revisits plans to face Crawford. Either way, the unbeaten southpaw is pressed with three mandatory title defenses and all officially on the clock.