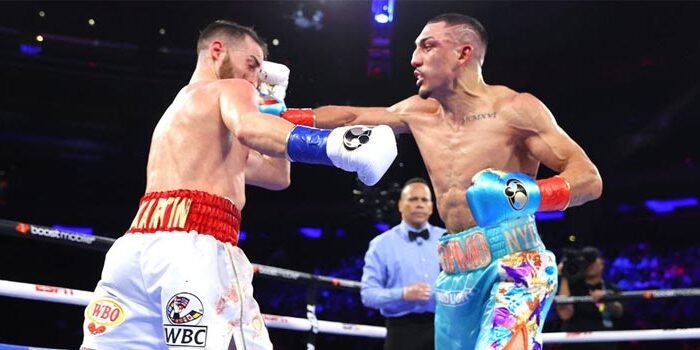 Junior welterweight contender Teofimo Lopez (18-1, 13 KOs) headlined in the big room at Madison Square Garden for the first time with a hard-earned split decision win over Spanish southpaw Sandor Martin (40-3, 13 KOs) in a 10-round final eliminator for the WBC crown. One judge had the bout 95-94 for Martin, while two others had it 96-93 and 97-92 for Lopez.

The former lightweight king was originally scheduled to fight Jose Pedraza, but a non-COVID-related illness forced the Puerto Rican contender to pull out of the fight. Martin immediately accepted the opportunity on three weeks’ notice.

Lopez initiated the bout in usual fashion by taking the center of the ring and trying to control the action with his speed and power. But at the end of the round, the two accidentally clashed heads, which evidently broke Martin’s nose and bothered him for the rest of the fight.

Martin’s quick footwork also began to cause problems in the opening minutes, especially as he used his lead right hand to lure Lopez in. In the second round, Martin was successful with that strategy and even dropped Lopez with a counter right hook.

Lopez then spent the rest of the fight trying to attack Martin and counter him when he committed to his punches. Martin was successful in preventing Lopez from positioning himself to land combinations, but at times he was also more concerned with evading shots than exchanging with Lopez.

As the fight ended, Lopez appeared to fight with more urgency while Martin seemed to think he had the fight won.

Lopez said, “It’s so hard to fight somebody like this when they’re running the whole time. Every time this guy committed, I countered and got him every time. He just ran the whole time. It’s OK, though. We got a lot to work on. But first off, I want to thank God for this. No matter what it was. I apologize to everybody tonight. This is not how we perform. But, listen, our dancer partner was running the whole time.

“Every time that this man wanted to commit, I was countering him and tagging him. That’s why he was running the whole time. I felt great overall. I knew he was tired. He didn’t want to commit. He was staying on his back foot and just running around the whole time. But it is what it is. This makes it look good. These guys are going to want to fight me now. More than ever. Now this is great. Now I can actually have a good fight.

Martin said, “It was a surprise with the judges. I won this fight clearly. For one judge, I only won two rounds? Really? There were two knockdowns. The referee didn’t count one of the knockdowns. He missed all of his punches. That’s a masterclass of boxing. That’s a robbery. But that’s the sport of boxing.

“In the ring, I controlled all the action. The timing. The moments. In the ring, controlled everything with my will. Teofimo was overanxious. In the eighth round, his corner told him, ‘Hey, let’s do it. You could lose this fight.’

Anderson tried to box calmly, but a few hard left hands from Forrest, a southpaw, forced him to step up the action after the first 30 seconds of the opening round. Anderson then began letting his hands go at full force, nearly stopping Forrest when he had him on the ropes and landing a total of 54 out of 114 punches thrown within the first three minutes of the bout.

In the following round, Anderson continued his dominance and landed a hard right hand that forced the referee to stop the fight at 1:34 of the second round.

Anderson said, “Like my corner said, once I get hit it’s a whole different ballgame. I switch up everything. My mindset. How I fight. Everything. I try to come in cool and calm. I see everybody kind of was expecting him to go out early. I didn’t want that. I did want to get all the way warmed up. But once he did hit me, as ya’ll see, something flipped, and all I saw was red. The 114 punches came and we picked it up.

“I learned to keep my composure even earlier. It shouldn’t have to take me to get hit for me to be able to do that. But everything was alright once I started to adjust myself and get my feet up under me. I have been kind of off for a little second, but I definitely think I came back and made it better.

Zayas Ends the Year in Style against Salazar

There was no feel out process as Zayas began to land shots in the opening round. Salazar was able to connect in the following rounds, but Zayas was able to make the proper adjustments in order to allow his skills to dominate his opponent. The 20-year-old Puerto Rican prospect was especially successful in landing shots to the body, implementing a relentless attack to his opponents ribs in the final round in order to stop Salazar. Scores: 80-72 and 79-73 2x.

Zayas said, “Thank you to all my Puerto Rican fans who came out and are watching back home. This one is for you guys. Thank you for all the support and the love. I got to go back and see this fight. But they told me that I looked good. There were a couple moments where I let down my defense. But I give myself a nice B+.

Davis said, “I felt great, man. He’s definitely a tough veteran. I was definitely trying to stop him in there. I had him hurt a lot of times, but he’s a veteran and knows how to survive. That’s what he did tonight.