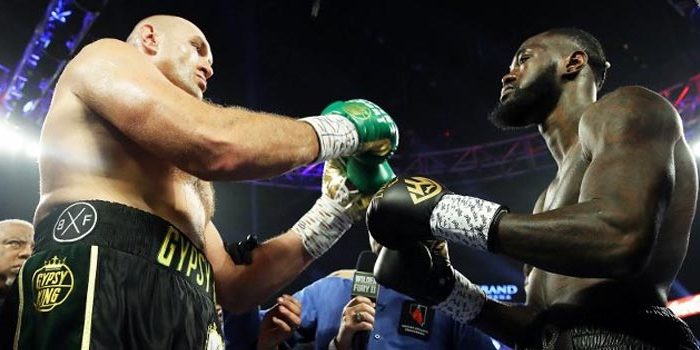 WBC World Heavyweight Champion Tyson Fury will have to defend his title in a trilogy fight with Deontay Wilder, according to the challenger’s co-manager Shelly Finkel.

Back in February, Fury dropped Wilder twice and stopped him in the seventh round to capture the WBC title. The bout was a rematch of their December 2018 encounter, which saw the two battle to a controversial twelve round split draw.

Top Rank, who co-promote Fury, are targeting a date of December 19th for the third contest. It was postponed several times due to the coronavirus pandemic.

The winner of the fight will have to make a mandatory defense against Dillian Whyte.

An existing order from the WBC is directing the winner to face Whyte by February of 2021.

Whyte, who holds the WBC’s interim-title, would have to overcome an upcoming clash with former champion Alexander Povetkin on August 22.

In a recent interview, Whyte’s promoter, Eddie Hearn, expressed his doubts that a Fury-Wilder trilogy fight would come off.

Hearn is not convinced that Wilder will move forward with a third encounter. Wilder has been unusually quiet about the fight in recent months.

“We want Dillian Whyte to fight Tyson Fury as soon as possible, and if Wilder is not available for any reason then Dillian should step in and take that,” Hearn told Sky Sports.

But Finkel, who manages Wilder with Al Haymon and Jay Deas, says his boxer will indeed move forward with the fight.