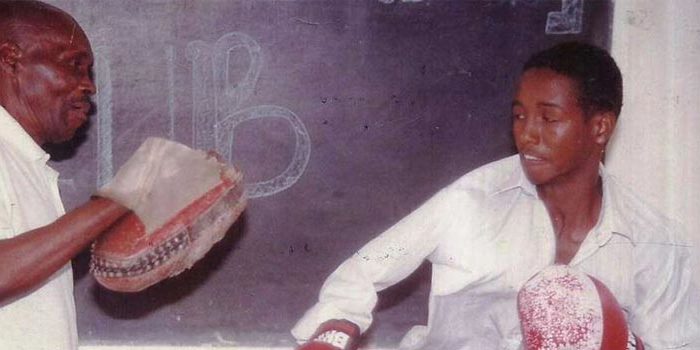 Nine years ago, the cruel hand of death robbed Kenyan sports fraternity of one of its prolific coaches, South African-born Eddie ‘Papa’ Musi.

He died in Mathare North, Nairobi, which he had made his permanent home after having lived in Kenya for five decades.

The talented boxing coach had developed an impressive stable of champions and stars in Kariobangi “Bangladesh” Gymnasium in Nairobi.

The bond formed between him and several of his boxers was stronger than any other coach/manager-boxer relationships in Kenyan sport. Musi died at the age of 76, having retired years earlier from teaching due to ill health.

Musi taught Mathematics and Science subjects at Guru Nanak Secondary School in Pangani, Nairobi and also introduced girls’ boxing in the country in the early 80s but against the wish of boxing administrators.

As coach, secondary school teacher and village elder at Mathare North for many years, Musi was a father figure to people whom he interacted with. He was sincere and down-to-earth.

“Bangladesh” boxers from Kariobangi fought bravely like Spartan soldiers not only for themselves but also for Musi in their endeavours. But ardent fans are worried about the future of “Bangladesh” after the grand old man of Kenya boxing left the stage. It’s difficult to find an answer to the question, particularly because he no successor.

His arrival in Kenya

Musi entered Kenya in 1967 via the Kenya – Tanzania boarder at Namanga in a group of young “warriors” who had fled Apartheid regime in South Africa into Zambia (then Northern Rhodesia) in 1960. This was at the beginning of the long struggle for freedom in South Africa.

They “warriors” stayed briefly in Zambia and later continued their journey to Mbeya and Morogoro in Tanzania. Some were dispatched to Egypt for military training, something which facilitated by President Abdel Gamal Nasser of Egypt.

At the time, great and patriotic African leaders who supported freedom struggle were Julius Nyerere of the Republic of Tanzania, Ahmed Sekoe Toure of Guinea and Kwame Nkrumah of Ghana.

“I turned down an offer to go to Israel for medical training but preferred to remain with African National Congress and the Pan Africanist Congress of Azania group. However, by 1966 five years had elapsed and some of them were becoming impatient so they demanded to be allowed to leave,” Musi explained to me years back.

In a lengthy interview withMusi, he narrated to me his sojourn in South Africa in March of 1995 after having been away from home for three and half decades as a refugee.

He had much expectation of meeting his family – his wife Dora and daughters  Lilian and Catherine. But he failed to meet them.

Musi had received a letter from Lilian in 1981 posted from Forest View in Johannesburg which was however delivered late to him in Nairobi by his compatriot who lived in Tanzania.

“Although I never fulfilled my dream of meeting my family, I am quite happy that I went and saw the new independent state under African National Congress of great statesman, President Nelson Mandela,” he said.

Asked whether he had future plans of returning home to look for his family, he hesitated and responded: “No, I won’t. It’s not easy now! Not easy at all to start again a new life for somebody of my age. The freedom struggle is now over. What remains now is for every citizen, irrespective of colour, to build a new South Africa.”

Musi’s trip to South Africa in 1995 was facilitated by the late Peter Orwa, president of Kenya Professional Boxing Commission (KPBC) at the time who had picked him to accompany boxer James Wanene as coach/manager for a continental junior flyweight title fight in Johannesburg.

However, 48 hours before the fight, the African Boxing Confederation (ABC) cancelled it because it had not been sanctioned.

Musi remarked jokingly during our interview: “Eh! Brother, although I have been away from home all these years, I haven’t forgotten my mother tongue Zulu. Sakubona kungani (good morning, how are you) is responded to by saying sikhona (I am fine).”

Musi, a trained secondary  school teacher, was born in 1940 in Orlando, Soweto in South Africa. He went to Orlando High School and learnt boxing at Donaldson Community Centre in Soweto with the late South African President Mandela and other senior colleagues.

“I could have gone further either to Cape Town, Natal or Durban University but the wind of freedom struggle which was blowing across the country was an indication that blacks were not happy with oppression by minority white rulers. It was then many foreign students turned out in big numbers to join our universities, some from Kenya”.

New base in Kariobangi

Musi arrived in Nairobi on a refugee status via Arusha by OTC Bus with Sh1,000 in his pocket. He was booked at Friend’s Christian Centre in Ofafa Maringo for a few months.

He later moved to a muddy hut in Kariobangi area and found many youths not attending school.

Within a year, he was employed in a private secondary school in Starehe Constituency and taught Mathematics and Science in Form One and Two.

Musi loved boxing so much and saved part of his salary with the intention of acquiring boxing equipment. Within six months, he had managed to buy four pairs of gloves and skipping ropes. Nairobi City Council supplied a punching bag for his new club, Kariobangi Boxing Club.

Under Musi’s tutelage, the club opened its doors to youth who previously played mostly estate football. They joined him for evening training sessions.Kariobangi Boxing Club, which later  became popular as “Bangladesh,” the Asian country which seceded from Pakistan in 1971.

It did not take long before coach Musi paraded relatively unknown boys for novices, intermediate and Kenya Open championships. They performed extremely well.

Soon, they outperformed Pumwani Club which was regarded a hot bed of boxing talent at the time. Other clubs such as Jericho and Mbotela were left struggling.

In 1972, Musi shot to the limelight when two of his boxers – light fly Dick Felix from St. Teresa’s Secondary in Eastleigh and flyweight Felix Maina – were selected to the Kenyan team which competed in the 1972 Olympic Games in Munich.

Another big moment for Musi was witnessed in 1973 when youthful George Oduori pounded his way into the Kenya team for the 2nd All Africa Games in Lagos, Nigeria. Oduori defeated Eddie Ndukwu of Nigeria in the featherweight final to claim gold.

Bantamweight Stephen Mwema and super heavyweight boxer, Crispin “Rocky Marciano” Odera, both deceased, were products of Kariobangi Boxing Club and won gold medals in the 4th All Africa Games held in Nairobi in 1987.

Heavyweight George “Foreman” Onyango from “Bangladesh” who was a former Kenyan coach, was  a gold medallist in 1990 Commonwealth Games in Christ Church, New Zealand.

With all these achievements, Musi was overlooked by panellists who never thought the deserved induction into Kenya’s Boxing Hall of Fame. Kariobangi Club for years was where the disciplined forces (Kenya Police and Kenya Defense Force) recruited boxers for national competitions.

Musi whose name was never entered in the Hall of Fame, had a good CV. He coached  Kenya’s “Hit Squad” which competed in the 1982 Commonwealth Games in Brisbane, Australia. He coached Nairobi City “Shujaa Squad” in Inter-Cities Boxing Championships against Kampala.

He was an executive member of Boxing Association of Kenya and also served as competitions secretary for Nairobi BAK branch.

Top: Coach and teacher Eddie ‘Papa’ Musi holds a boxing pad to student Dahir Mohammed in a training session at Guru Nanak Secondary School in Pangani, Nairobi in the 80s.

Above: Musi with students in class at the school. As a trained teacher, he taught Mathematics and Science.