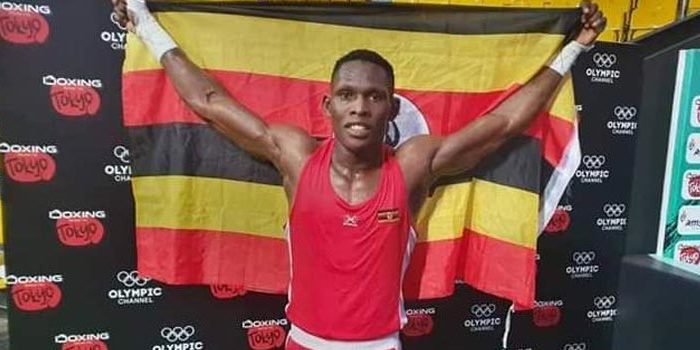 Uganda National Boxing team “Bombers” Captain, Shadir Musa Bwogi is the only boxer that has directly qualified for the 2020 Olympic Games in Tokyo, Japan.

Bwogi put up a spirited fight to overcome Ghanaʼs, Lartey Jessie in a third place Box off that on Saturday evening, in the Menʼs Welterweight category in the Africa Olympic Qualifiers in Dakar, Senegal.

The Bombers captain won by split decision scoring 3-2 points from a possible five.

Bwogi becomes the first Ugandan to qualify for Olympics games in a space of 12 years since Ronald Serugo last featured in the 2008 championship in Beijing, China.

Bwogi together with Isaac Masembe and Catherine Nanziri were the only Ugandan representatives that managed to reach the box offs with only the skipper escaping the hurdle.

Uganda was represented by 13 boxers, eight of whom are male and five females.

The 2020 Olympic Games are scheduled to take place beginning Friday, 24 July to Sunday, 9

Team Uganda that represented in Senegal: