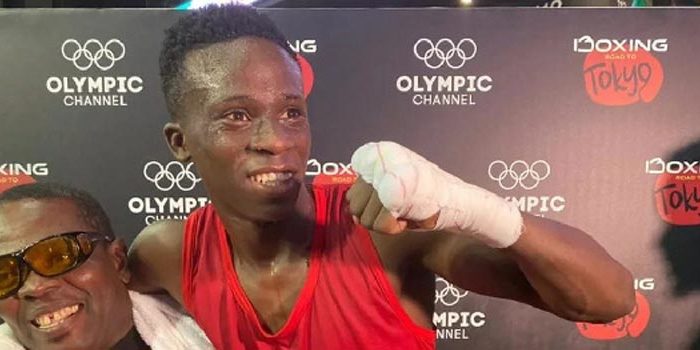 Ghana’s Samuel Takyie became the second member of the Black Bombers to qualify for the 2020 Tokyo Olympic Games on Saturday.

The promising amateur boxer defeated Isaam Masemse from Uganda in their 3rd place contest at the African Qualifiers to earn a spot for Ghana at the Olympic Games.

Takyie won the first round with a blistering start but not the second after Masemse rose up to the occasion.

The third and final round proved tougher as both boxers went all guns blazing. However, Takyie who stood tall in the finals managed to book a place at the Olympics.

Takyie thus joins Sulemanu Tetteh, captain of the Black Bombers team to become the only two Ghanaians to have qualified to the Olympics in boxing.

Unfortunately, Ghana’s 2018 Commonwealth Medalist, Jessie Lartey failed to make it to the Olympics after losing to another Ugandan, Bwogi.