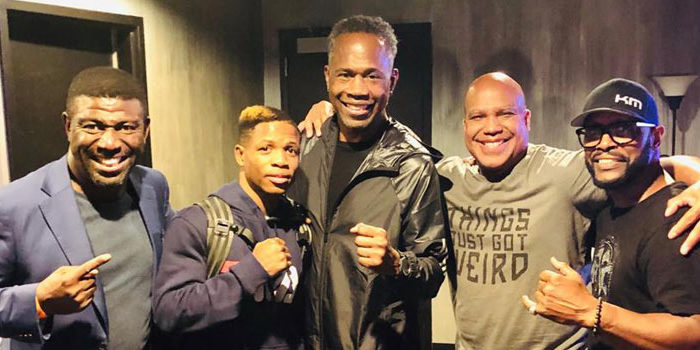 Fighting for the first time in two months, Micah (23-0, 19 KOs) showed no ring rust and plenty of improvement. Cruz was the aggressor in the first, attacking a Micah who looked tentative early coming off a 14-month layoff. An overhand right caught Micah on the head–and appeared to wake him up.

From then on, the Ghanaian had his way, dazzling ringsiders with a series of power shots. Mexico’s Cruz (13-2, 7 KOs) was saved by the bell in the first but he didn’t last much longer. Micah continued the onslaught in the second, bloodying Cruz with hard hooks and crosses and inducing the stoppage in that frame.

It was perhaps the best performance of the night on a stacked Premier Boxing Champions (PBC) card. In the main event, Erislandy lara reclaimed the WBA regular world super welterweight title with a second-round TKO over Ramon Alvarez, older brother of the better known Canelo Alvarez.

Micah was every bit as impressive. This was his first fight under new trainer Andre Rozier, who also trains Ghana’s sole current world champion, Richard Commey. It was also his first fight since leaving the now-defunct Real Deal Promotions and his first on the PBC banner.

In a recent ranking of the 25 most important people in boxing, Haymon came in first. His PBC series is the most-watched boxing show in the US, leading competitors ESPN and DAZN by a significant margin.

Micah showed out on the new platform as he continues to prepare for a world title shot. He moves one step closer with this victory.