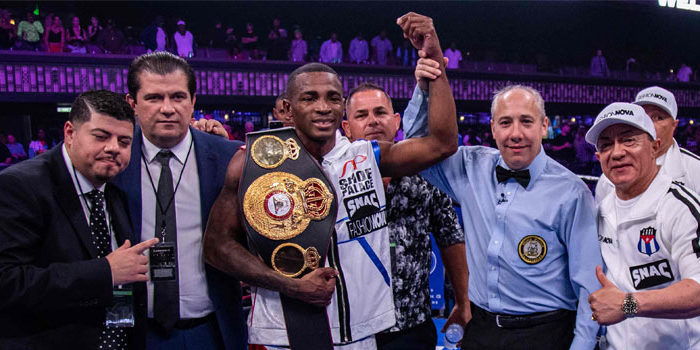 Ramon Alvarez tried to stack the deck against Erislandy Lara, but it didn’t matter in the slightest.

Lara, the Cuban former super welterweight champion, picked up a secondary WBA world title Saturday night in the PBC on FOX main event at The Armory in Minneapolis, Minn., breezing by the Mexican journeyman in two rounds.

Lara (26-3-3, 15 KOs) is trying to position himself for another run at the top of the 154-pound division and is now firmly back in the mix after doing what he was supposed to do.

Alvarez (28-8-3, 16 KOs) astoundingly missed weight Friday by nearly five pounds. On fight night, FOX’s Heidi Androl reported that Alvarez weighed 177.4 pounds, with Lara coming in at 169.8 pounds. That didn’t matter except for maybe Alvarez being even slower in the ring than anticipated.

Veteran Lara, 36, had no trouble landed power shots. Two straight lefts in the second round sent Alvarez halfway through the ropes. Referee Mark Nelson gave Alvarez the standard standing eight count. Lara pounced once the fight resumed, pounding Alvarez until Nelson stopping the fight at the same time Alvarez’s corner threw in the towel. The time of stoppage was 2:03.

This is Lara’s first win in three fights. In 2018, he lost a thrilling split decision to Jarrett Hurd in a 154-pound unification that earned Fight of the Year honors. He then followed that up with an exciting split draw against unbeaten Brian Castano.

When Castano decided to vacate his WBA regular title this summer, it opened up the opportunity for Lara to fight Alvarez for the vacant belt.

“I can’t kid myself. I did feel those four pounds that were extra there,” Lara said after the fight about Alvarez’s extra weight.

Lara also called out the champions in the division. He is still bothered by the close July 2014 bout that went Canelo Alvarez’s way, calling for a rematch—a nd surprisingly mentioned another big name not in his own weight class.

“I’ll fight anybody in the division. I do want to fight the best boxers out there. Being higher divisions or lower divisions, and I’m talking about Errol Spence Jr. or Canelo Alvarez.”

Though the victory came against the much less gifted Alvarez brother, it must have still felt sweet for Lara to get over on the fighting Alvarez family.

With rematches between WBA/IBF champion Julian Williams and Jarrett Hurd as well as WBC champ Tony Harrison against Jermell Charlo, the 154-pound division looks to be pretty tied up for the immediate future. But Lara is back among the big names after taking care of business on Saturday night.

In an enticing super welterweight co-feature, up and comers Sebastian Fundora and Jamontay Clark battled to a 10-round split draw.

The battle pitted two unusually tall 154-pound prospects trying to prove their worth. At 6-foot7, Fundora (13-0-1, 9 KOs) might very well be the tallest super welterweight in the history of boxing. Clark (14-1-1, 7 KOs) is no slouch at 6-foot-2 but had to adjust to fighting a guy five inches taller after boxing a foe seven inches shorter in his previous bout. Fundora confirmed the height of Clark was also a bit difficult to handle.

The 21-year-old Fundora came out of the gates strong but Clark, 24, was able to adjust, especially once Fundora stopped using the jab as much. Clark began to time Fundora with his own jab along with overhand lefts. Fundora had never faced a southpaw in the paid ranks, and it showed.

Fundora hurt Clark at the beginning of the sixth round with a right hook. Clark intelligently held on and pulled Fundora to the canvas, which allowed him to regain his bearings and work his way back into the fight.

Clark came on strong down the stretch, repeatedly catching the stalking Fundora coming in with hard counters.

All three judges saw it different, one with a too wide 98-92 for Fundora, another favoring Clark by 96-94, and a third scoring it even, 95-95. Both fighters expressed interest in a rematch when talking to FOX’s Heidi Androl afterwards.

Kicking off the FOX broadcast was 27-year-old Cuban heavyweight prospect Frank Sanchez (13-0, 11 KOs), fighting at The Armory for the second time in as many months. He made easy work of tough 39-year-old Victor Bisbal (23-5, 17 KOs) of Puerto Rico, as Bisbal’s corner stopped the fight at the end of the fourth round.

Bisbal was grossly overweight, coming in at 274.5 pounds – a career-high by 21 pounds. Yet his skills were apparent from the outside. However, Sanchez was superior in every facet, whether it was boxing from the outside or winging power punches in close.

Sanchez consistently pounded Bisbal to the midsection, which was a large target. Bisbal’s best chance was to catch Sanchez coming in recklessly—he came close on several occasions. But at the conclusion of the fourth round, Bisbal seemed completely spent and the fight was stopped.

For a closer look at Lara vs Alvarez, check out our fight night page.