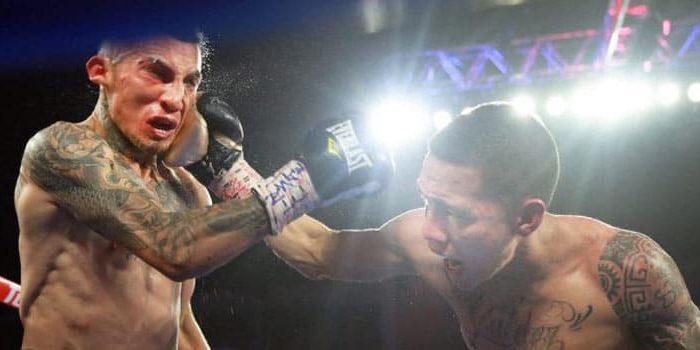 This was Valdez’s second fight under trainer Eddy “Chapo” Reynoso, who also trains Canelo Alvarez. Those changes were apparent but truly hard to guage against a Sanchez (14-1, 7 KOs) who, though game, never seriously threatened.

Valdez (26-0, 20 KOs) used his left hand to control much of the bout, whether it was his consistent jab or the left hook. After losing the first three rounds, Sanchez attempted to up the pressure on Valdez and was quickly forced back, by sharp rights from the champion. A left hook in the middle of the frame also got his attention.

The left hook paid divididends in the fifth, dropping Sanchez briefly. The challenger woke up quickly, hurt but still aware of what was going on. He wisely played keep-away for the round’s remainder.

The 5th Round opens up with a big knockdown from the champ @oscarvaldez56!#ValdezSanchez | @ESPN pic.twitter.com/tAMBrpQh5G

Nevertheless, Sanchez refused to fold—and paid the price. Round after round, he walked into an assortment of power punches from Valdez. That was during the few moments he slipped past Valdez’s educated jab.

It got worse as the fight progressed. Valdez enjoyed a big ninth round, opening a cut under Sanchez’s right eye with the left hook. The onslaught continued in the 10th and the 11th, in search of the KO.

It wasn’t meant to be. Sanchez held on to hear the final bell.

“I’m happy, but we could always do better,” said Valdez afterward. “We are improving.

A featherweight showdown versus Carl Frampton has been bandied about and is still likely, if Valdez chooses to remain at 126. It’s a viable fight for Valdez, who has yet to take on a top opponent during his championship run.