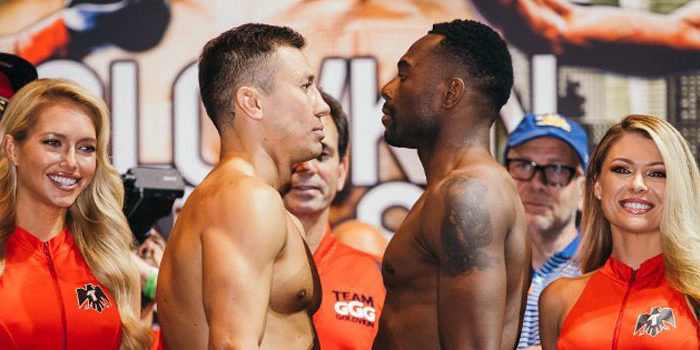 The fight will be contested at a maximum weight of 164 lbs. and streamed live on DAZN beginning at 7:00 p.m. ET / 4:00 p.m. PT. GGG vs. Rolls kicks off the exclusive six-fight, three-year global partnership between GGG Promotions and DAZN, the world’s fastest-growing sports streaming platform.

Undefeated super middleweight contenders Ali Akhmedov (14-0, 10 KOs) of Almaty, Kazakhstan and Marcus McDaniel (15-0, 2 KOs) of New Orleans also faced off ahead of their clash for the vacant WBC International Super Middleweight title in the co-main event.

Also part of the main card, in a battle of undefeated Brooklyn brawlers, rising star Brian Ceballo (8-0, 4 KOs) and Bakhtiyar Eyubov (14-0-1, 12 KOs) will be slugging it out in an eight-round welterweight battle for borough supremacy.

Golovkin (38-1-1, 34 KOs), the former IBF/IBO/WBA/WBC middleweight champion, repeatedly has stated that they settled on a catch weight of 164 pounds to accommodate Rolls (19-0, 10 KOs), who has boxed between 160 and 168 pounds. Rolls weighed 160 pounds for his last fight, however, and noted that it was Golovkin, not him, that demanded the catch weight.

Rolls expects to weigh somewhere between 167 and 170 pounds when their bout begins Saturday night.

Golovkin doesn’t think he’ll be heavier for this fight than when he has competed at the middleweight limit.

“I still feel the same as I did at 160,” Golovkin said. “I don’t think I’ll be heavier on the day of the fight as I was [Friday]. It also depends on how much water, how much liquid I will drink. It’s always under 170.”

Assuming the heavily favored Golovkin wins Saturday night, he is expected to return to the middleweight limit for his next fight. He hopes that bout is a third meeting with rival Canelo Alvarez.

“I still consider myself to be a 160-pound fighter,” Golovkin said, “but this particular fight which we are facing is not a title fight. So, why not make a compromise to the opponent?”