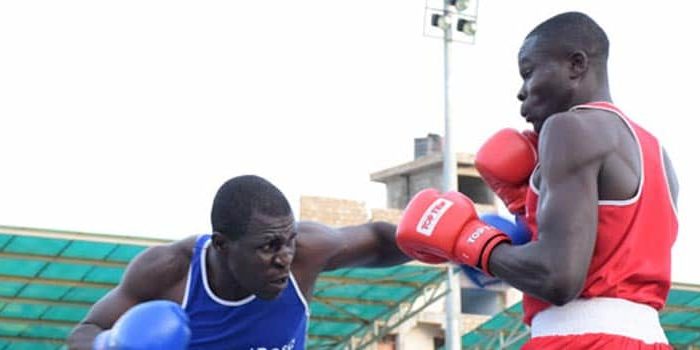 The long wait is over and it’s all systems go as Boxing Association of Kenya (BAK) prepares to deliver it’s elections at Kasarani Stadium on Friday June 28.

The Sports Dispute Tribunal ruled on Tuesday that elections will go on as scheduled saying its the only way to restore sanity in the sport.

The exercise will be preceded over by the IEBC with Sports Registrar Madam Rose Wasike making the list of observers invited.

Anthony Ombok Otieno aka Jamal will be seeking to unseat interim chairman John Kameta in what is anticipated to restore sanity in the run up to gigantic global competitions.

It is not clear whether interim chairman John Kameta is defending his seat but Jamal who has made an extensive countrywide tour to push his now noble “Ndondi Mashinani” Initiative reveled that he is going for the jugular on June 28.

Rumour has it that Nairobi BAK Chairman Kenneth Otieno aka Kentrak who had shown interest in the post if chairman has thrown in the towel but whatever is up the sleeves of participants will be known when the boys are separated from men in Kasarani.

“We former boxers have suffered immensely under the current regime and it reaches a time when you feel our boys and girls have had enough and need a fresh impetus in their careers,” said Jamal.

The Ndondi Mashinani initiative has so far donated an assortment of boxing equipment worth thousands of shillings across the country with the second phase being boxer’s remuneration and upgrading of training facilities in public halls.

“If only we could lay the much-needed emphasis on the boxer then the sky will be the limit for Kenyan boxing. My campaign trail has been a learning experience and I realise talent abounds,” added Jamal.

“I have strived to rescue despondent former boxers like Bilali and Conjestina and send them to rehabilitation centers. Boxers continued to suffer in silence, All we need is an enabling environment for our boxers and I can assure you that the Wangila’s and Muchoki’s of this world will be forthcoming,” Jamal said of his campaign initiative.

The Sports Dispute Tribunal ruled on Tuesday that elections will go on as scheduled saying its the only way to restore sanity in the sport.

“Kenya is yet to win a medal at the Olympics since 88′ in Seoul when Robert Wangila became the first African gold medalist.  Slowly by slowly we will regain our lost glory, but not until changes come to fruition.  Our Olympic and All Africa Games fortunes are at stake.”

Attempts to reach Kameta proved futile but from the recent court ruling, boxers are leaving nothing to chance.

Interim secretary general Isaac Mbote announced that plans to hold the elections are at an advanced stage.

The elections initially scheduled for May 28 were pushed forward by a month following the request of Registrar of Sports madam Wasike in a letter to Mbote to allow compliance with the sports act of 2013 and indeed the rules and regulations of the office of the registrar.

The BAK Council made a landmark resolution to hold the long awaited elections on May 28 which were later postponed.

As campaigns continue from behind the scenes the Mbote led BAK faction which has savoured majority of officials and boxers  from the past regime whose mandate ended in 2017 has held the National  Novices in Nairobi, National Intermediates in Thika, Kenya Open in Nairobi and the first and second legs of the national boxing league in Nakuru  and Busia respectively.

Kameta’s faction whose secretary Lt. Col. Paul Mung’ori is not recognised by the Registrar’s office have only held two events in Mwingi and Mombasa.

Majority of the best boxers from Police and the rest of the over 15 counties including Kenya’s first ever Commonwealth Games woman boxing medalist Christine Ongare and international Shaffi Bakari support Mbote’s faction of BAK which is behind team Jamal candidacy in the forthcoming elections.