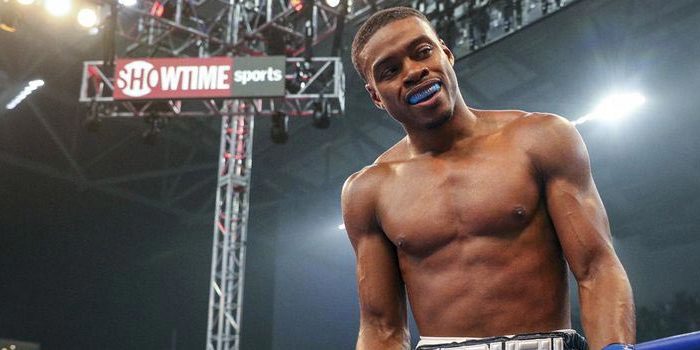 A satisfied Spence smiled as he discussed that situation on Friday following a weigh-in for the Robert Easter Jr.-Rances Barthelemy fight Saturday night at The Cosmopolitan.

“His promoter needs to do a better job promoting him, I guess,” Spence said, referring to Crawford. “I feel like he was a failure on the promotional side, so I think Bob needs to get back to the drawing board if he thinks me and Crawford’s gonna be a 50-50, down-the-middle deal. If I’m bringing in probably over 400,000 pay-per-view buys and he’s doing a hundred and something, why should we split it if we fight each other?”

Neither FOX, which distributed the Spence-Garcia fight March 16 from AT&T Stadium in Arlington, Texas, nor ESPN, the distributor of Crawford-Khan a week ago from Madison Square Garden, have officially announced buy rates for those fights.

Crawford (36-0, 25 KOs) was a heavy favorite over Khan (33-5, 20 KOs), who declined to continue during the sixth round, once Crawford hit him with what was ruled an unintentional low blow. According to Spence, a diminished Khan wasn’t the only obstacle that made Crawford’s second pay-per-view fight a difficult sell.

“It’s not just the opponents he’s fighting, but the whole promotional thing behind him,” Spence said. “Like when Showtime promotes and FOX promotes, they really put everything into it. With the Crawford fight, you really didn’t hear nothing until the week of the fight. I kind of forgot about it. I didn’t hear nothing about it until the week of the fight. They started promoting it probably Thursday or Friday. That’s when it really got out there like that. So, I feel like they could’ve done a better job of promoting it.”

The 31-year-old Crawford, of Omaha, Nebraska, and the 31-year-old Lomachenko (13-1, 10 KOs) are generally regarded as two of the top three boxers, pound-for-pound, in the sport.

“With Crawford, it’s a lack of promotion,” Spence said. “I feel like Bob doesn’t promote Crawford like he should. I don’t know what that’s about, but I feel like he promotes Lomachenko way better than they promote Crawford. Even with the lead-up to the promotion of the Crawford fight, they were talking about Lomachenko in the same sentence with Crawford. Why are you talking about Lomachenko, when you’ve got your pay-per-view fighter fighting Saturday night? Every time they mentioned Crawford, they mentioned Lomachenko. What are you doing that for, when you’ve got Crawford fighting?

Spence suggested Friday that he won’t fight Crawford, the WBO 147-pound champion, in a highly anticipated welterweight title unification fight until sometime late in 2020, at the earliest.

Arum said before Crawford defeated Khan that he would call Al Haymon this past Monday to initiate negotiations for Crawford to fight Spence next. The 87-year-old promoter proceeded to lambaste Haymon in the immediate aftermath of Crawford’s win over Khan (https://www.boxingscene.com/arum-haymon-tell-spence-listen-white-guys–138214).

“I like Terence,” Spence said. “I feel like Terence is a great fighter. I’ve nothing but respect for Terence. I’ve got Terence’s number in my phone right now. He wished me good luck in my last fight. I’ve got nothing but respect for him. I just feel like they’re doing him dirty. They gave Tyson Fury that big-ass deal, and then they give Terence Crawford a $3 million deal. Come on! That’s a slap in the face right there.”