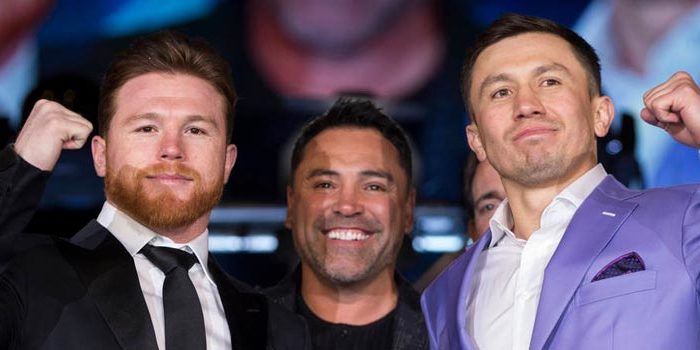 Golden Boy Promotions CEO Oscar De La Hoya supports the words of his star fighter, Canelo Alvarez, who recently stated that Gennady Golovkin would need to win a world championship in order to land a third fight against him.

De La Hoya also hoped that on May 4 there will be at least 20,000 souls supporting Canelo in search of one more feat in his career when he faces Daniel Jacobs in a unification battle in the main event of a Golden Boy Promotions card at the T-Mobile Arena in Las Vegas.

Canelo said a few days ago that he expected Golovkin to be a champion in order to face him for a third time.

GGG returns on June 8th in a stay busy fight against Steve Rolls.

De La Hoya rejects any talk that Golovkin has already secured a third fight with Canelo for the fall.

“It’s not true that (Golovkin) has the fight in September with Canelo, I agree with Canelo, one hundred percent, Golovkin has to climb his way back again,” said De la Hoya.

“Canelo is now the champion and he has many options, he can go up to 168 pounds, go up to 175 pounds and make history … If GGG wants to fight Canelo, he has to fight and win a world championship.”

In the event that Canelo wins this May 4, then he will have three of the four titles, those of the World Boxing Association, the World Boxing Council and the International Boxing Federation. And only the World Boxing Organization that Demetrius Andrade currently holds will be missing.

Regarding the sale of tickets for Canelo and Jacobs on May 4, De la Hoya says that there are still tickets available, but he expects that to change next week.

“Things are going excellent, there are tickets left, but a few, we know that it will end on May 4. We have no doubt, we will fill the arena, there will be 20 thousand souls supporting Canelo in Las Vegas,” De La Hoya said.