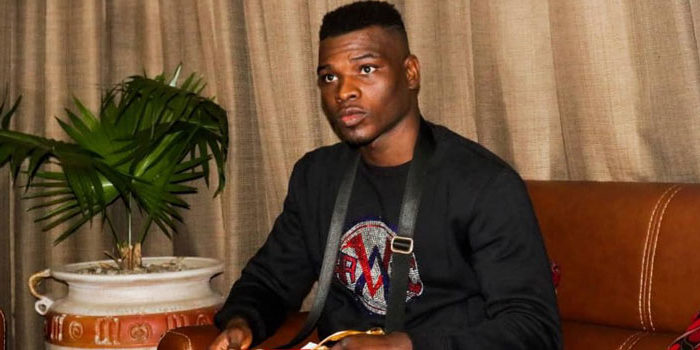 Commey won the title in emphatic fashion, blasting out Russian Isa Chaniev in two rounds on February 2nd at the Star in Frisco, Texas.

Ghana’s ninth world champion was slated to fight unified world 135-titlist and pound-for-pound king Vasyl Lomachenko on April 12th, but Commey suffered an injury to his right hand during the Chaniev bout and will be sidelined for 6-8 weeks.

The champion returned home and was forced to address the issue of kinsman and fellow lightweight Emmanuel “Gameboy” Tagoe, who reportedly challenged Commey to a bout. Tagoe has since denied those rumors, but added that Commey “can’t run” from him, insinuating they will cross paths at some point.

“Honestly speaking I’m not scared of him but why would I challenge a fellow Ghanaian? We want more world champions in this country,” Commey told reporters upon arrival at Kotoka International Airport in Accra.

The world champion also made it a point to note the difference in levels between the two, saying Tagoe “spars little amateur boys when preparing for his bouts.”

But it didn’t stop there. The low-key Commey, obviously tired of his compatriot’s insinuations, stated that Ghana Black Stars captain Asamoah Gyan, founder of Baby Jet Promotions (which promotes Tagoe), had made major investments in “Gameboy” with little to show for it.

“Asamoah Gyan has invested a lot for him to get a world title but where is it (world title)? Has he got anything like this?” Commey asked, pointing at his shiny new IBF world title draped over his shoulder.

Given their current standings in the sport, a bout between the two would likely be a mismatch. Commey has been fighting at a high level since 2016, when he nearly annexed the then-vacant IBF title versus an undefeated Robert Easter Jr. Easter won via disputed split decision.

Tagoe, on the other hand, has yet to beat a top-ranked lightweight. He did, however, impress in his last bout, a wide unanimous decision victory over aged and faded former world champion Paulus Moses.