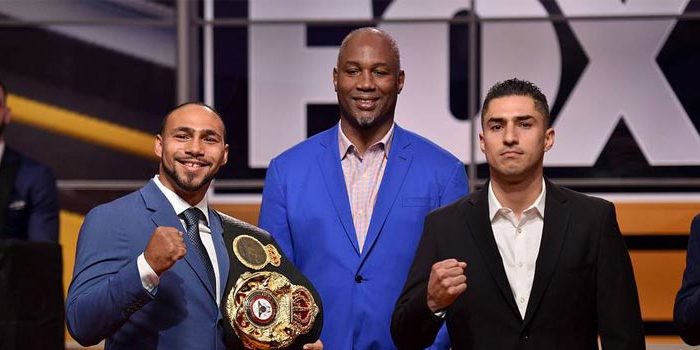 An injury-hampered Thurman (28-0, 22 KOs) has been out of action since winning his last two fights – each of which was at Barclays — by close unanimous decision over former titleholder “Showtime” Shawn Porter in June 2016 and split-decision over two-division title winner Danny “Swift” Garcia in March 2017, adding Garcia’s WBC crown to his WBA version.

“One Time” Thurman borrowed the nicknames of four-division champion Adrien “The Problem” Broner, left-handed IBF 147-pound champion Errol “The Truth” Spence and Garcia to Insist that he is all of his potential rivals wrapped up into one.

“It’s been a long time since I’ve been back in the ring. I’m just going to prove what I’ve always proven, that I’m the best. That Keith ‘One Time’ Thurman, I’ve been the problem. I am the truth. You’re boy is swift,” said Thurman, who had surgery on his right elbow and then he injured his hand in training.

“Any name that’s they have, I’ve already shown all of those skills, talents and attributes I plan on continuing to do it. A lot of people are itching. They say, ‘When are you coming back, champ?’ I’m itching to get back. So we’ll be back soon. We’ve got a fight date, and I’m truly looking forward to it. I’m going to perform like I always do.”

After vacating the WBC title due to injuries, “One Time” was ringside in September when Porter (29-2-1, 17 KOs) won a clash of former 147-pound titleholders by split-decision over Garcia  (34-2, 20 KOs) for the WBC crown Thurman previously owned.

Thurman is 3-0 at Barclays, his debut being a near-shutout unanimous decision over former champion Jan Zaveck in March 2013 that was followed by his title-winning, two-knockdown 10th-round stoppage that dethroned previously unbeaten Diego Chaves in July 2013.

Not only has Thurman experienced physical difficulties due to his injuries, but the inactivity has had an effect on him mentally as well.

“The injuries weren’t fun. I didn’t enjoy doing a lot of the interviews. I was depressed and things of that nature. What my situation was elbow surgery, which took about 10-to-12 months to recover from, then we got back into the gym and suffered a hand injury,” said Thurman.

“All year, I’ve been dealing with that, because I couldn’t jab my sparring partners. There was no telling when I was gonna get into the ring. Obviously, we gave up the WBC title and we let these boys fight for it to bring some more action into the sport. But, now, I’m back, and I plan on getting my belt back, and there are more things to come in the future. But we’re starting it off in January.”

The 34-year-old Lopez (36-7, 19 KOs) is coming off a unanimous decision over Miguel Cruz (17-1, 11 KOs) in April, representing his third straight win since a sixth-round TKO loss to two-time champion Andre Berto in March 2015.

Thurman, who turns 30 on November 23, has made seven defenses (three by KO) of the crown the WBA he won by two-knockdown, 10th-round KO of previously unbeaten Diego Chaves in July 2013.

Washington is after his second straight win following consecutive losses by fifth- and eighth-round knockout to heavyweight champion Deontay Wilder and unbeaten contender Jarrell Miller in February and July 2017.