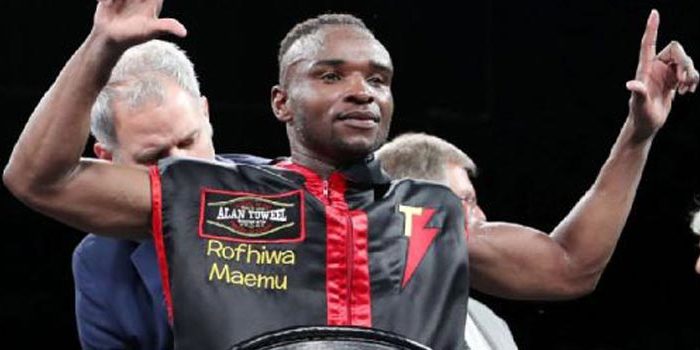 When Rofhiwa Maemu defends his World Boxing Association (WBA) Pan African featherweight title against Tello Dithebe at Meropa Casino on September 21, he will be looking to make a statement of intent.

This is a rematch of their 2016 bout, which Dithebe won by a split decision, though this is the second time South Africa’s Maemu will be defending his belt since winning it in October last year.

“From being a champion, I just want to build on to that. Go through stages on to bigger things, proving people wrong. I remember at one point I lost three fights in a row [from 2013 to 2014]. Then I proved that I am strong and I can take on these guys.”

As for taking on Dithebe again, ‘The War Child’ says: “I can’t say we’re changing much [since 2016’s fight]. We’re just working our way, just doing our thing that makes us who we are.

“I think the last time I fought Tello I fought his fight but I don’t think I lost it. Maybe a fair result would have been a draw. But I didn’t lose that fight.”

Some of the losses on his record, seven out of 25, can be deceptive as he had issues outside the ring, with the 26-year-old explaining: “I was broke back then. I didn’t have sponsors, I was just going for [any] fights.”

So desperate was the situation four years ago that he fought in the lightweight and junior welterweight divisions, despite being a natural featherweight.

“I got myself a sponsor in 2014 and from then I could drop my weight. Then I could just focus on what I really wanted to achieve. Then I started chopping those boxers,” he says.

Since moving down to 126 pounds, he has had 15 fights and only lost two, against Dithebe and IBF Africa Champion Azinga Fuzile.

Of the second defeat, in July last year, Maemu is defiant: “Azinga was running away from me. He should have showed that he’s the best.

“He’s good, he’s smart. I can’t take anything away from him. But he had to run away, he had to survive.”