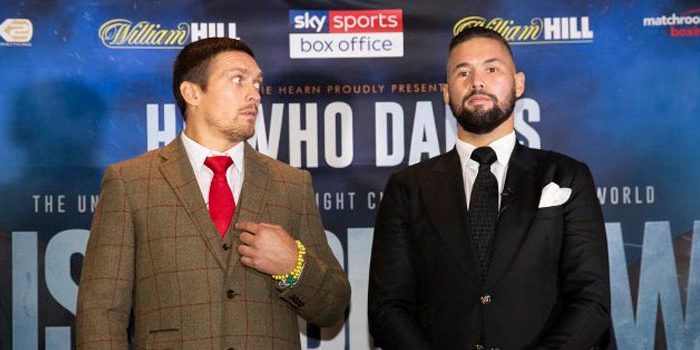 Tony Bellew says he is fighting a “monster” in Oleksandr Usyk –– but feels he can knock out the undisputed cruiserweight world champion.

The 35-year-old former WBC champion takes on the Ukrainian in a challenge for the Ring Magazine, WBO, WBA Super, IBF and WBC world titles at Manchester Arena.

Bellew faced off with Usyk –– whose best pal Vasyl Lomachenko, the WBA lightweight champion, was in attendance –– in Manchester on Monday, having posed in the ring at Wembley Stadium ahead of Anthony Joshua’s win over Alexander Povetkin on Saturday.

And he had nothing but compliments to pay to a man who has obliterated all comers and quickly risen to become the best in the 200-pound division ahead of their clash, exclusively live on Sky Sports Box Office, on November 10.

“I’m going up against the monster, the man no one really wants to fight,” Bellew said. “He is an amazing fighter. I will not admire him and stand there in awe, letting him rattle off five-punch combinations on my head. That will not happen, it can’t happen. I will fight with everything I’ve got.

“You will have to nail me to the floor to keep me there –– and you could do it, I’m not stupid, but I don’t think you can.”

Bellew was effectively retired on the back of his second victory over David Haye up at heavyweight back in May at the O2 Arena in London.

But after his victory against Murat Gassiev in the World Boxing Super Series final in Moscow in July, Usyk called out ‘Bomber’ and, as they say, the rest is history.

“Just one wrong step, one wrong manoeuvre, and it’s over,” added Bellew. “He passed a comment after Saturday’s stare down and the comment that he passed was he thinks I am arrogant.

“He says he believes I am arrogant, but it is not arrogance he sees. For the first time in his whole career he sees a man looking back at him that believes he can win, and not a man who believes he is just going to lose.

“I have the one thing he doesn’t have and that is a punch that can switch lights off within a blink of an eye.”