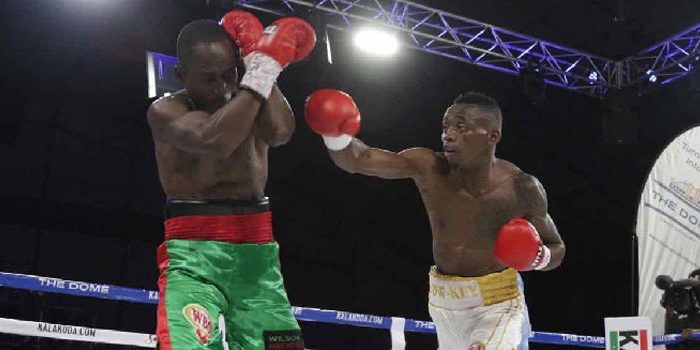 NESTOR Tobias hailed Jeremiah Nakathila as Namibia’s next boxing superstar after he destroyed Wilson Masamba of Malawi with a fourth round knockout on Friday evening.

“Jeremiah Nakathila is a great fighter – he’s a very talented kid, he’s still young and the sky is the limit for him. Now he is number three in the world, but the number one and two will have a mandatory fight and I’m sure by next year he will fight for the world title.

“When he gets his opportunity for the world title I’m sure he can win and make us all proud. He is a future world champion and a future star and he can dominate the junior lightweight ranks for a long time. He’s got speed, he doesn’t have a weight problem, he can punch and he’s got the reach – he’s got everything you need at that weight,” he said.

Fighting in the main bout of the Desert Rumble 3 bonanza at the Swakopmund Dome, which was jointly promoted by Kalakoda Promotions and Nestor Sunshine Boxing Academy, Nakathila gave a great display of power and precision as he waited for his opportunity, before sending Masamba crashing into the ropes with a sharp combination that put him down for the count of ten.

Nakathila dominated from the start with his longer reach and raked in the points with a long sharp jab and heavy combinations to the head and body. He already sent Masamba to the canvas in the third round and although the Malawian beat the count, the end was near as Nakathila finished him off one minute and four seconds into the fourth round.

Nakathila said he was never troubled and just took his time before knocking Masamba out.

“I just took my time from the first round. I wanted to finish him off in the second round already, but my corner said I should just take my time, so I was always in control and it was just up to me to finish this guy.

“It was a left hook and then a straight right and when I caught him I knew he would not stand up, and that’s why I immediately ran and jumped on the ropes to celebrate,” he said.

It was the third time that Nakathila had defended the WBO Africa super featherweight title which he won in September last year, while he now has a pro record of 15 wins and one defeat.

Nekundi built up a points lead in the early rounds with some big punches, but Ndaendapo came back stronger in the final rounds. He however seemed to have left it too late and in the end Nekundi won the fight with two judges scoring it 97-93 and 96-94 in his favour, while the the third judge scored it 94-90 to Ndaendapo.

Harry Simon Junior maintained his unbeaten record with a great display to beat Lukas Handivele on a fourth round technical knockout.

Although he received some opposition from a game Handivele, Simon was too quick and strong and finished him off in the fourth round with a barrage of punches before the referee stepped in to stop the fight.

Ndafoluma sent Kaangundue down to the canvas in the third round and although he beat the count and fought back bravely, he decided he had had enough and failed to come out for the fourth round.

In a junior bantamweight fight over four rounds, Filemon Nghutenanye beat Sakaria Nikodemus on a unanimous points decision with the judges scoring it 39-37, 39-37, 40-36 in his favour.