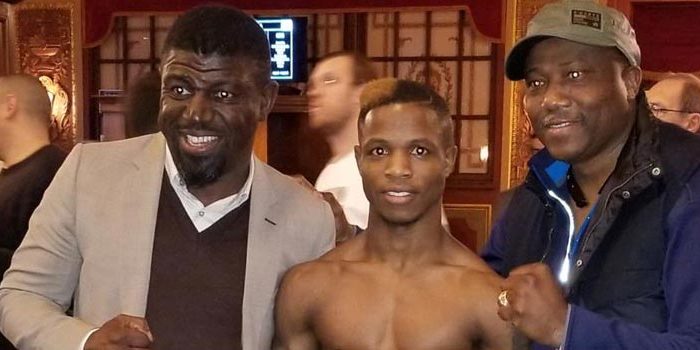 The past year has been a whirlwind, but Ghana’s Duke Micah is comfortable in the eye of the storm.

Perhaps because his own eyes are fixated on the prize. This Saturday, June 9th, the 26-year-old Micah will take a step closer to his goal of a world title when he defends his WBC International bantamweight belt against Thomas Snow (19-3, 12 KOs) at the Kings Theatre in Brooklyn, New York.

The eight-round affair will be televised on SportsLive’s free OTT platform beginning at 7:00 PM ET.

“That fight taught me a lot,” he said. “I was impressed by his conditioning. It made me realize that you have to be ready and in tip top shape no matter what. He really came on during the later rounds. I had to stand my ground and fight through it.”

Micah is no stranger to adversity – “The Baby-Faced Terminator” was a moniker he earned well before donning his first pair of gloves. With his trademark blond-dyed hair and beguiling grin, the diminutive Duke could easily pass for a high school sophomore. But underneath that exterior is a man hardened by past experiences.

Duke’s parents divorced when he was seven. He and his twin brother subsequently lived with their father, grandmother and aunt in the impoverished (even by third world standards) Zongo area of Ghana’s capital city Accra.

“I was already a known streetfighter then,” he recalls. “I caught a lot of beatings from my father and aunt because of it. It was so bad that I decided I had to learn how to protect myself. Not from the street fights, but from those beatings!”

As fate would have it, Zongo is adjacent to Ghana’s famed Bukom district, a boxing hotbed which produced Azumah Nelson, Ike Quartey, Joshua Clottey, Joseph Agbeko, Richard Commey and others.

Naturally, Micah was a frequent visitor. One of the neighborhood elders witnessed his fiery spirit and suggested he channel it toward boxing.

“I didn’t really like boxing though,” Micah admits. “I preferred street fighting. But then I passed by a gym one day and saw two local stars sparring. It was amazing. That inspired me.”

Micah began training at a popular Accra gym which, unbeknownst to him, was owned by Jacob Zwennes, his future co-manager. His reputation as a boxer grew quickly. Under the tutelage of national boxing coach Lartekwei Lartey, Micah climbed the amateur ranks and represented Ghana at the 2012 Olympics.

“We had a lot of good fighters on that team, guys like Isaac Dogboe,” he says. “But if you didn’t have good management or promotion after the amateurs, you suffered.”

“Duke had a tough time adjusting at first,” says trainer Lawrence Carl Lokko. “His girlfriend was expecting and he supports his family back home. But no matter what is going on around him, he never stops training. In fact, he has taken off only a handful of days since his last fight.”

“Duke has the mentality of those old school boxers,” he said. “I love working with him because he’s always eager to do more. That kind of quality is hard to find in boxers but when they have it, it can take them very far.”

Micah was to face Frenchman Yoann Boyeaux on April 21, but when Boyeaux weighed in four pounds over the limit, the fight was rescheduled for one week later. Inexplicably, Boyeaux pulled out and returned to France instead.

“That really hurt me,” Micah says. “My girlfriend had just given birth to my first child, a boy. I couldn’t be there because I’m here training. I’m supposedly fighting for my family and I can’t even get an opponent. That took all my good feelings away. I didn’t want to be around anyone after that.”

“Duke is an engaging, passionate personality,” explains co-manager Michael Amoo-Bediako, who also manages lightweight contender Richard Commey. “Jacob Zwennes and I worked tirelessly to keep his spirits up when those fights fell through. Real Deal reassured him that they were working hard to get him a meaningful fight before placing him on the road to eliminators for a world title.”

Despite the setback, Micah’s popularity in the U.S. is growing. He recently signed a sponsorship deal with boxing equipment maker Venum (www.venum.com). Ghana boxing is undergoing a resurgence on the international scene. Venum believes that Micah’s got next.

First, Micah must get past Snow this Saturday.

“He’s a tough fighter, a southpaw who is coming down in weight,” he notes. “In boxing, nothing is easy, but if you prepare right, you can make it look that way. Snow will look like easy work.”

Micah still has one eye on the World Boxing Super Series tournament and the rest of the division.

“Naoya Inoue, Zolani Tete, I want all of those guys,” he declared. “I’m not backing away from any of them. I want that challenge. My managers tell me that it’s a process but I’m ready for those guys now.