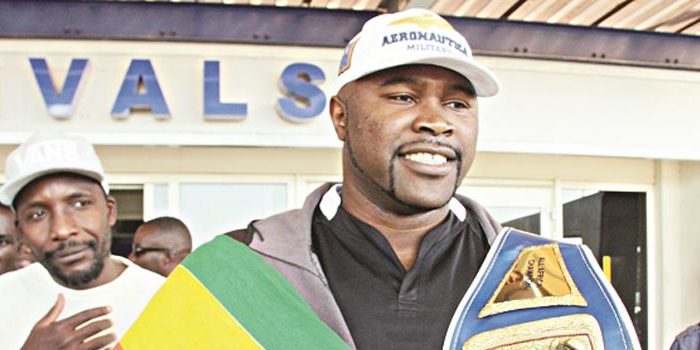 WORLD Boxing Federation (WBF) All-Africa heavyweight champion Elvis Moyo has recovered from a hand injury sustained in his last fight and says his preparations for an international title match to be held in Harare later this month are on course.

Better known as the “Bulawayo Bomber,” Moyo is set to exchange blows with Ukrainian boxer Maksym Pedyura in a bill dubbed “Kubatana” on April 27 at Harare City Sports Centre. The fight comes three months after the Bomber exploded at the City Sports Centre, successfully defending his title against Congolese Kilola Lubika Didier in January.

Moyo emerged from the Didier fight with a hand injury that saw him embarking on light training for more than a month as he recuperated. In an interview from his South Africa base, Moyo who is disappointed after his Croatianopponent Ivica Perkovic pulled out of last month’s “Europe versus Africa” bout, held in Vienna, Austria, said he is raring to go.

“As you know I was supposed to be part of a group of five African boxers travelling to Europe last month but I failed to do so because my opponent pulled out and I also had challenges in getting a visa. I think missing the Vienna trip was a blessing in disguise for me because then I had been carrying a hand injury but now I’m good. I’m ready for Kubatana bill which I believe will unlock international doors after winning it,” said Moyo.

It is Moyo’s condence before the fights that seem to scare his opponents and the good thing about the boxer groomed at Tshaka Gym which is in Bulawayo’s old suburb Makokoba, is that he walks the talk.

The Bulawayo Bomber thanked the April 27 sponsors, Kalakoda Promotions and Kwese Sports for giving him an opportunity to revive his boxing career having spent about five years without boxing.

“I’ve missed some opportunities to fight abroad but I believe that God is preparing me for bigger things. I’m grateful to Kalakoda Promotions and Kwese Sports for their continued partnership, which has seen me reviving my boxing career and fighting in Zimbabwe.

“All those fights which were cancelled have made me stronger. When someone decides to pull out there’s nothing I can do other than demonstrate my skill by pummelling the next opponent, which is what I’ll do to Pedyura,” said Moyo.

Manchester, United Kingdom, in November 2017 when his opponent chickened out at the last minute. Moyo called on Zimbabweans to come and rally behind him and his countrymen who will fight in supporting bouts at the April 27 gig.