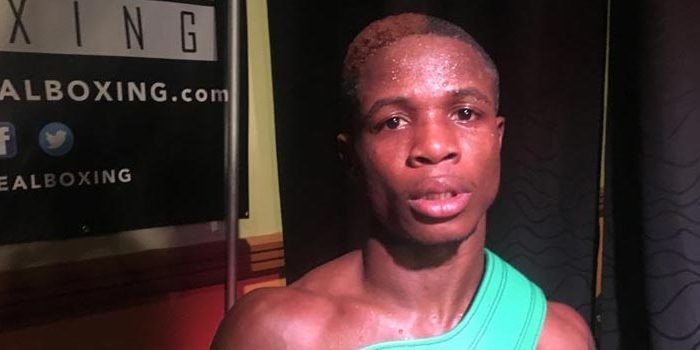 Undefeated bantamweight contender Duke Micah is primed and ready for the biggest fight of his career. Micah will take on Frenchman Yoann Boyeaux this Saturday, April 21, at the King’s Theatre in Brooklyn, New York.

The card will be promoted by Evander Holyfield’s Real Deal Boxing, the outfit Micah is signed to.

It’s been a long camp for the Ghanaian, who spent most of his training in the Bronx, NY, under the watchful eye of Kwame Asante, best known for training Joshua Clottey, among others.

“You know I have been training in the US under the direction of Kwame Asante for the last few weeks,” he told Class FM. “He has taught me so much within this period and I cannot afford to let him down, together with the other guys who help me out at the gym.

He’ll have his hands full against the 30-year-old Boyeaux (41-5, 26 KOs). Boyeaux fought for a world title in his last bout, suffering a resounding third-round TKO loss to WBO super flyweight champion Naoya Inoue.

“My opponent is a good boxer and more experienced in the ring, but I am taking this fight with all I have,” Micah said. “If I want to be a world champion, I have to win this fight. It is as simple as that. I am going to spend the last few days focused on my preparation and hopefully I will win the bout on Saturday.:

The 26-year-old Micah, also known as the “Baby-Faced Terminator” is represented Ghana in the 2012 Olympics. He made his U.S. debut last November, overcoming a spirited challenge from Mexico’s Jose Santos Gonzalez to win a ten-round majority decision.