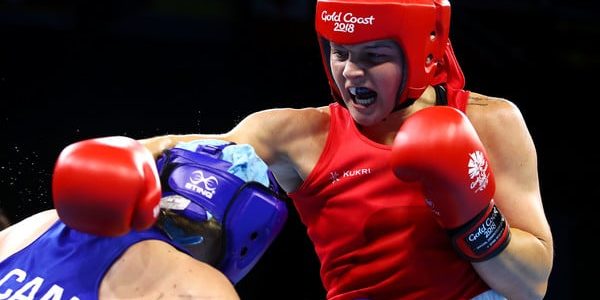 Canadian boxer Marie-Jeanne Parent lost her semi-final on Wednesday, but will leave the Commonwealth Games with a bronze medal.

And Canada will earn five more medals in the boxing ring, with only the colour to be decided.

Parent lost a 4-1 decision to England’s Sandy Ryan in the 69-kilogram division.

The 22-year-old from Quebec City was the last athlete named to the team, summoned a little more than a month before the games when Mandy Bujold withdrew.

Also Wednesday, Caroline Veyre of Montreal was stopped by Nigeria’s Yetunde Odunuga in the 60-kg quarter-final.

The losses were the first for Canada at the boxing meet.

In the last fight of the night, Montreal’s Harley-David O’Reilly won by walkover over Cameroon’s Ulrich Rodrigue Yombo in the men’s 81-kg quarter-final.

He will be joined in the semi-final by Sabrina Aubin of St-Jean, Que., (57 kg), Montreal’s Tammara Thibeault (75 kg), Eric Basran of Vancouver (56 kg) and Thomas Blumenfeld of Montreal (64 kg).