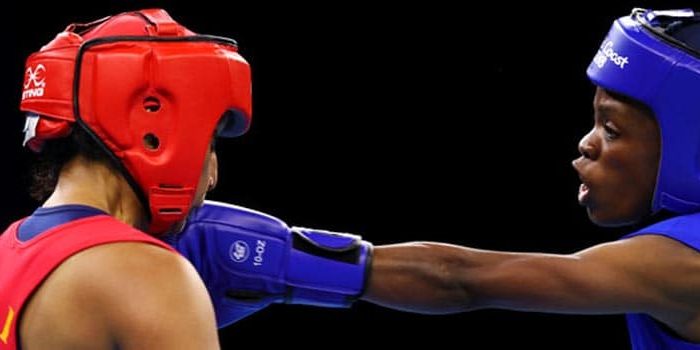 Christine Ongare spared Kenya’s boxing team the embarrassment of a total annihilation by getting onto the medal podium on Wednesday with victory in the women’s flyweight contest at the Oxenford Studios.

With the rest of Team Kenya’s boxers sent home without a medal, Ongare was the last of the 11-strong squad to get onto the ring, and she was under immense pressure in her quarter-final bout of the 51-kilogramme category.

But such pressure didn’t show as she sent her Sri Lanka opponent Dulani Jayasinghe to the canvas twice in the second round, forcing the referee, Valeri Pastuhov of Republic of Moldova, to stop the bout and declare Ongare winner.

The Kenyan, who fights for the Kentrack Boxing Club, will now come up against Carly McNaul of Northern Ireland on Friday where the winner will be assured of a silver medal and the loser settling for bronze.

In her quarter-final match, she eliminated Nigeria’s Ayisat Oriyomi one minute, 51 seconds into the first round.

Ongare was at a loss of words after the bout.

“I’m very emotional. I’m grateful I got through,” she said.

Coach Patrick Maina was besides himself with joy, confident that his boxer has the potential to eliminate the Irishwoman and make the final.