Being that Brooker is a strong super middleweight, and Chavez having a similar build, it made sense that Brooker would get such a call to help out the Mexican Idol for the much-anticipated showdown.

“I went to camp with Canelo in San Diego, and we ran in the mountains at 15,000 feet. I was there close to two weeks and sparred twenty rounds with him,” said Brooker.

“It was a great experience to be around a fighter who is one of the elite fighters in the world.  He is so composed.  I was brought into to pressure him and mimic Chavez, Jr.  Canelo is such an experienced fighter, and I learned so much from him.  He was showing me how to set up my shots, and even certain exercises with my neck.”

Brooker was very impressed with the whole team, and believes that this camp will take him to the next level.

“His team is so professional and down to earth.  I am looking forward to this fight on Saturday.  It will be a good fight.  I was shocked to know that Canelo watched my last fight on ShoBox.  They could tell that I was trying to box more and get a way from my brawling style that I had employed in most of my bouts.  They gave me good advice, and told me not to change who I was when I was having a lot of success as a pressure fighter, and then to mix in the boxing aspect to my game.”

“I needed this.  This will take my to another level.”

Also in a six-round bout:

Jeffrey Torres (2-0, 1 KO) of Philadelphia will fight Kashon Hutchinson (2-2, 1 KO) in a battle of Keystone State based lightweights.

Isaelin Florian (6-0, 3 KO’s) of Santo Domingo, Dominican Republic will take on an opponent to be named in a bantamweight bout.

Harold Lopez (1-0, 1 KO) of Bethlehem, PA will square off with an opponent to be named in a bantamweight fight.

THERE WILL BE A PRESS CONFERENCE ON TUESDAY, MAY 9TH AT THE SUGARHOUSE CASINO BEGINNING AT 5 PM

Tickets are on sale for $100, $75, $50, and can be purchased at SugarHouseBoxing.eventbrite.com 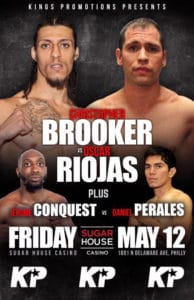 SugarHouse, which opened in September 2010 as Philly’s casino, features 1,891 slots, 103 table games, a 28-table poker room, fun and unique dining options, riverfront views and free on-site parking. The casino employs approximately 1,700 people, and for six consecutive years has been voted a “Best Place to Work” by the Philadelphia Business Journal and for five straight years a “Top Workplace” by Philly.com. For more information, visit http://www.sugarhousecasino.com.