Ghana’s Bastie Samir and Cameroun’s Kamdam Kouengoue both made weight on Friday afternoon for their cruiserweight battle Saturday night.

Fighting for the first time since April 2021, the 33-year old Samir (pictured right) weighed in at 193.1 pounds.  The unheralded Kouengoue (pictured left) tipped the scales at 193.5 pounds.

“It’s been a while since I have been in the ring and I want to thank the promoters for giving me this chance to be back,” Samir told BoxingAfrica.com.

“I am going to give off my best to make the show great. I will finish it in two rounds. I had a lot of challenges in my career but I want them to know that I’m back to being active again.”

Kouengoue, who is not listed on Boxrec.com – nor anyone else for that matter – was equally confident.

“Bastie Samir is a good fighter but I didn’t come here to lose. I am going to enjoy the fight tomorrow,” he declared.

“I won’t argue with him because I want to do my talking in the ring. That is the only way to prove a point.”

The fight of the night is the tantalizing co-main event featuring undefeated, rising prospect Holy Dorgbetor putting his national featherweight title on the line against veteran Emmanuel ‘Akufo Addo’ Quartey.

Last October, the 23-year-old Dorgbetor (8-0, 5 KOs) won a unanimous decision over Success Tetteh in an entertaining back and forth. The 32-year-old Quartey (25-4, 21 KOs) is coming off back to back losses, most recently refusing to come off his stool for round five against unbeaten Taiwo Agbaje last May. This could be a do or die moment for the experienced pro. 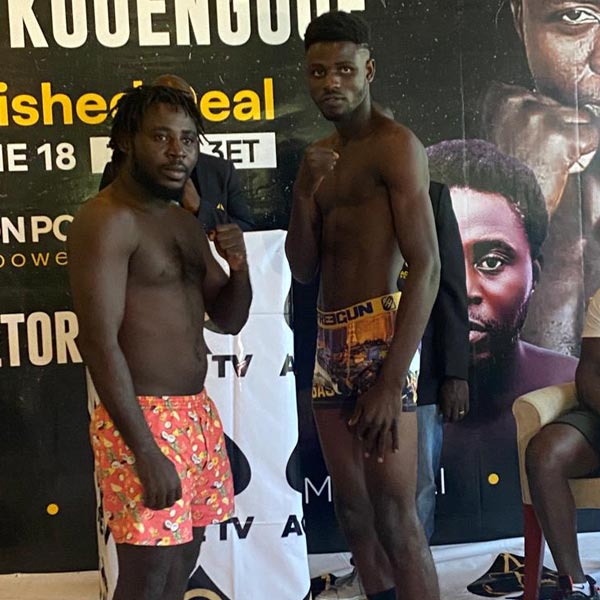 “He has to be very careful because I can be very dangerous,” Quartey warned. “I need all my fans to come around. I am not promising a knockout but I will take the opportunity when it avails itself.”

Dorgbetor says he’s ready for anything Quartey brings to the ring.

“He should show me what he can do in the ring and I promise to provide him with an antidote. I will beat him hands down and if he doesn’t take care he is not going to last the entire rounds,” Dorgbetor told BoxingAfrica.com.

In a lightweight contest, Richard Fenyi will fight Sylvester Doku.

John Zile and Robert Nunoo will slug it out in a featherweight contest.

There will also be a super welterweight contest involving Raymond Kofi Ansah and  Emmanuel Baidoo Sarpey.