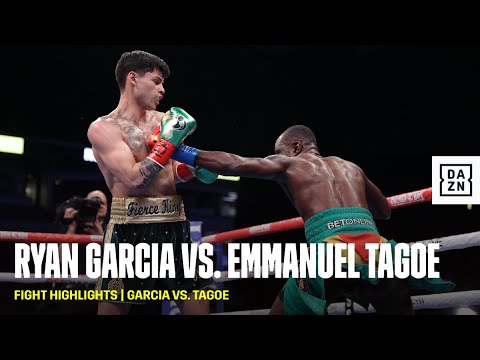 San Antonio was treated to fireworks at the Alamodome today when the undefeated boxing superstar, Ryan Garcia (22-0, 18KOs) of Victorville, CA, made a triumphant return to the ring against the top-rated Emmanuel “The Gameboy” Tagoe (32-2, 15KOs) of Accra, Ghana.

The 12-round lightweight fight featured a strong performance from Garcia to a crowd of 14,459 as he landed an early power punch that sent Tagoe to the canvas in the second round. Once both fighters found their rhythm, Garcia systematically broke down the Ghanaian boxer as he landed precise punches to the head and body.

Tagoe tried his best to keep his distance using an ineffective jab. Garcia visibly hurt Tageo in the 10th round, but the Ghanaian fighter resorted to holding Garcia to prevent further punishment. Ultimately, the judges ruled in Garcia’s favor with scores of 119-108, 118-109, 119-108 for a victory by unanimous decision.

“He was making it difficult for me to end it,” said Ryan Garcia. “He was crafty with the holding, and I was trying to get him off me, and he was moving a lot; it was a new experience. I think I have to cut the ring off better with a guy who will keep moving all 12 rounds. I made sure to get him in the body a lot and used my left hook to hurt him. I have a lot of love for San Antonio. It was great that after a year and a half layoff, I was received by such a great crowd. It’s a blessing. I wanted to knock him out, but he was very crafty. At the moment, I could feel like I hurt him, but he really can take a punch.”

“First of all I want to thank my team,” said Emmanuel Tagoe. “I know the reason why I lost. I didn’t throw my right arm. He came forward but I couldn’t get any points from pushing. I think I’m going to go home and sit down with my team. Ryan Garcia is a good boxer.”

“I think Ryan did a fantastic job, after a one-and-a-half layoff,” said Oscar De La Hoya, Chairman and CEO of Golden Boy. “He fought a tough guy from Ghanna with only one defeat, he was slick, he was tough, he was surviving the whole night. Ryan almost had him out but I am glad Ryan went 12-rounds, it was a great experience.”

“In between rounds I was just telling him you’ve got to track him down,” said Joe Goossen, Trainer to Ryan Garcia. “He’s not going to engage you just have to keep the pressure on. He’s a tough kid. He only has one loss in the beginning of his career. He’s been on a win streak for a very long time. He has a great chin. He was in great shape and he came here to win. He didn’t comer here to lose. But after a while he was not trying to win, he was just trying to survive. Ryan was then trying to track him down and trying to catch him. Tagoe was not being very agreeable and he didn’t engage to fight a lot. Who will we fight next? I take a back seat to all of that. They don’t come to the gym and tell me how to train my guys and I don’t go to their office and tell them how to make fights. When they throw something g at me I say that sounds good to me and we go to work.”

“We’re going to talk to Dibella and see what’s next,” said Peter Khan, Manager to Emmanuel Tagoe. “Emmanuel went 12 rounds with Ryan. Emmanuel was out of the ring longer than Ryan so I think that’s a victory. I think we learned that Emmanuel has a chin, he took some big shots tonight. It was a good fight and Ryan performed really well.”

In the co-main event of the night, the resilient “King” Gabriel Rosado (26-15-1, 15 KOs) of Philadelphia, PA, was defeated by Shane Mosley Jr. (18-4, 10 KOs) of Pomona, CA, via majority decision in a 10-round fight capturing the WBA Continental Americas Super Middleweight title. The fight went the distance as Mosley used his jab to set up his shots, while Rosado became the aggressor. Mosley, Jr. made great use of his footwork and head movement to avoid many of Rosado’s power punches. Mosley won with scores of 98-92, 97-39, and 95-95.

“They know who I am now,” said Shane Mosley, Jr. “Gabriel is a great champ. We have to see what’s available. Right now 168 is tied up. Canelo has all the belts. Unless he vacates or fights someone else. I mean who’s going to turn down Canelo. I moved to 168 for the opportunity.”

History was made for women’s boxing as Houston’s Marlen Esparza (12-1, 1 KOs) defeated Tokyo’s Naoko Fujioka (19-3-1, 17 KOs) via unanimous decision and was crowned the WBC, WBA, and first ever Ring Magazine Flyweight World Championship. The 10-round championship fight was full of edge-of-your seat action as both fighters came forward and delivered devastating punches. Esparza made sure to use her feet to avoid some of Fujioka’s attacks. Ultimately, the judges ruled in favor of Esparza with scores of 100-90, 100-90 and 97-93.

“I thought it was a really good performance considering how hard she brings it,” said Marlen Esparza. “She’s a very seasoned fighter, she’s a world champion. I’m proud we did everything we practiced, me and my couch James Cooper. We really executed well and we expected it to go that way. You don’t know what a world champion can bring. We had to be patient and see what she had to bring to the table. It wasn’t tough because of the punches but more because she was smothering. I’m really just grateful I could have this experience not only for womens’ boxing but for my fans and really solidify the division. I really want the next two belts. ‘La Bonita’ from Argentina is the one I want, but I have to let my team decide what’s next. I’m happy for the future.”

Azat Hovhannisyan (21-3, 17 KOs) of Los Angeles, CA, stopped Dagoberto Aguero (15-2, 10 KOs) of San Cristobal, Dominican Republic, in the second via TKO in a 10-round featherweight fight. Hovhannisyan stopped his opponent with heavy shots stopping him at the 1:11 marker of the second round. All fights were streamed live, exclusively on DAZN worldwide.

“I was planning on escalating the fight as it went on,” said Azat Hovhannisyan. “That was just the second round pace. I was warming up. When I landed the first body shot I knew I was going to hurt him.”

Headlining the action on the Golden Boy Fight Night on YouTube, with Beto Duran and the pride of San Antonio, WBA Flyweight World Champion Joshua Franco calling the fights; former world champion Patrick Teixeira (31-3, 22 KOs) of Sao Paulo, Brazil, fought Paul Valenzuela (27-11, 17 KOs) of Santa Rosalia, Mexico, in a scheduled 10-round middleweight battle. Teixeira was unfortunately disqualified in the second round due hitting his opponent on the back of the head. Leaving Valenzuela the winner via DQ.

The co-main event of the Golden Boy Fight Night live on YouTube featured two undefeated fighters, San Antonio’s Gregory Morales (13-0, 8 KOs) and Hollywood, CA’s Katsuma Akitsugi (8-0, 1 KOs) in a crowd pleasing scrap. Both fighters came forward and delivered an action packed fight, as they each stayed in the pocket to break down one another. The 8-round featherweight fight ended with Akitsugi taking the unanimous decision victory. Akitsugi won with scores of 78-74, 80-72, and 78-74.

“I want to thank my trainer and my sponsor,” said Katsuma Akitsugi. “ I’ve been through a lot and they helped me be more focused. I’m always training hard, no days off. So when they call me I don’t lose my opportunity.”

After a long layoff due to injury, Tristan Kalkreuth (9-1, 7KOs) of Duncanville, TX, stopped Santander Silgado (30-11, 24 KOs) of Panama City, Panama via a spectacular second round KO at the 2:15 marker. The heavyweight fight was originally scheduled for 6-rounds.

“I’m very blessed to be here and be back where I am,” said Tristan Kalkreuth. “It’s a lot of emotions right now. I felt good. I was anxious and a little nervous. I’ve been out of the ring for 8 months. I was curious to see how my arm would feel. I went in and threw a right hand, it felt 100.

In a lively scrap, George Rincon (13-0, 7 KOs) of Dallas, Texas, defeated Alejandro Frias (13-6-2, 6 KOs) of Tepic, Mexico, via unanimous decision with scores of 96-91, 96-91, and 98-89. The 10-round super lightweight battle saw some notable moments when Rincon was pushed out of the ring and received a head butt that made the judges take away a point from Frias.

“That was obviously my toughest fight to date,” said George Rincon. He was a very rugged fighter, I knew that coming into the fight. But this experience is only going to make me better. I was able to identify things that I still have to work on.”

“I feel really rusty,” said Hector Valdez Jr. “ I think I could’ve taken him out if I trained more. It’s the first fight in over a year. I hurt him but he was really crafty to get in and hit him. There were punches there but as soon as I threw them he would move a little and they would go off course.”

In the first fight of the night, Santos Ortega (7-0, 3 KOs) of Sacramento, CA defeated Hollywood, Florida’s Jesus Martinez (30-16-1, 15 KOs) via knock out at the 2:15 marker of the second round. The fight was originally scheduled to be a 6-round featherweight fight.