A large portion of the boxing industry has chosen to ignore the criminal history of Daniel Kinahan, even as the controversial figure continues to make inroads into the sport. Government officials aren’t as willing to stick their collective heads in the sand.

The controversial boxing figure was officially identified by the U.S. Department of Treasury’s Office of Foreign Assets Control (OFAC) as a key member of the Kinahan Organized Crime Group (KOCG), the U.S. government office announced Monday evening. Kinahan was named among seven parties, including his father Christopher ‘Christy’ Kinahan Sr.— who was previously convicted and imprisoned for drug possession and money laundering—and brother Christopher Jr., along with three affiliated businesses, all against whom the Treasury department designated and sanctioned for criminal activity. 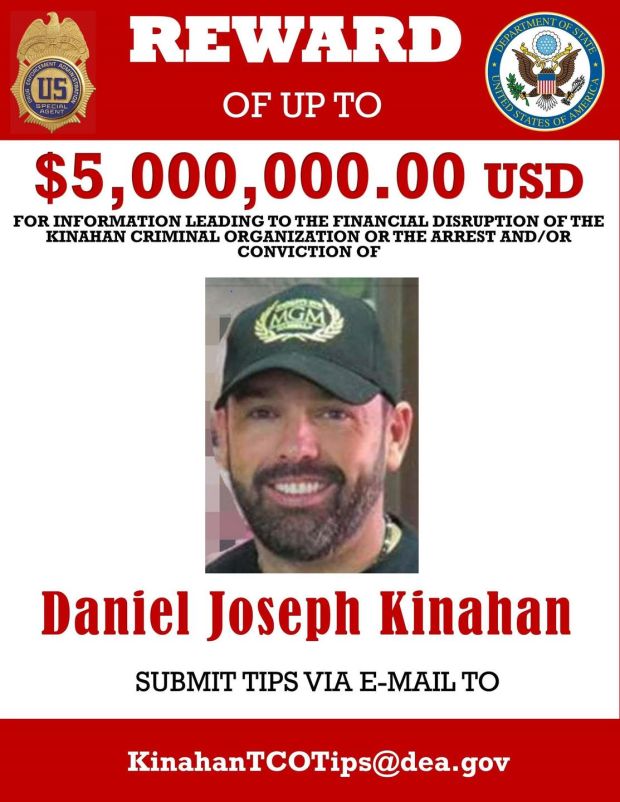 “The Kinahan Organized Crime Group smuggles deadly narcotics, including cocaine, to Europe, and is a threat to the entire licit economy through its role in international money laundering,” Brian E. Nelson, Under Secretary for Terrorism and Financial Intelligence declared in a statement. “Criminal groups like the KOCG prey on the most vulnerable in society and bring drug-related crime and violence, including murder, to the countries in which they operate.

“Treasury is proud to have coordinated so closely with our international counterparts, and the U.S. government will continue to use every available resource to dismantle these criminal networks.”

A press conference held by An Garda Síochána—Ireland’s National Police and Security Service—Tuesday in Dublin—revealed that the U.S. Department of State has placed a $5,000,000 reward for information leading to the financial disruption of KOCG or the arrest and/or conviction of Kinahan, his father or his brother.

Kinahan was identified as overseeing the criminal organization’s drug trafficking operations, although he has never been arrested for any of his alleged criminal activity. The U.S. Treasury department also tied him to the financial and business management of Ducashew General Trading, LLC, a business consultancy based in Dubai where Kinahan has lived since 2016.

None of Kinahan’s direct boxing ties were mentioned in Monday’s declaration, which focused more on the criminal side and companies with direct links to any of the seven targets.

Kinahan was a founding member of MTK Global, originally named MGM (Macklins Gym Marbella) before taking on a rebranding due to a naming dispute with MGM Grand Resort and Casino. The name was changed in 2017 to MTK, an acronym for Mack The Knife—the nickname of Matthew Macklin, a former middleweight contender and Kinahan’s longtime close friend with whom he founded the company.

Macklin sold the company in 2017 to Sandra Vaughan, who in a 2020 interview with IFL TV alleged that “there are no ties to Daniel Kinahan, there was no contract or financial transaction, absolutely nothing. He hasn’t got anything to do with MTK Global.”

That claim is supported at least in part by the U.S. Department of Treasury, who on Monday named just three companies directly tied to the seven key members of the KOCG:

–        Ducashew General Trading, LLC, which is alleged to be “owned or controlled by, directly or indirectly, Daniel Kinahan. Daniel Kinahan runs Ducashew through various individuals and is involved in its financial and business management;

–        Hoopoe Sports, LLC, a Dubai-based sports management advisory company managed by Ian Dixon who “was designated for materially assisting, sponsoring, or providing financial, material, or technological support for, or goods or services to or in support of, Daniel Kinahan;”

–        Nero Drinks Company Limited, a UK-based alcoholic beverage company “owned or controlled by, directly or indirectly, John Morrissey,” an Irish national based in Spain who was designated “for materially assisting, sponsoring, or providing financial, material, or technological support for, or goods or services to or in support of, the KOCG.”

Hoopoe Sports is the closest suggestion to KOCG’s involvement in boxing. Its website lists just five clients—all boxers, including former two-division titlist Billy Joe Saunders who is directly advised by Kinahan and considers him a close friend. Two of the other four boxers—three-time Olympian and former flyweight title challenger Paddy Barnes, and former junior bantamweight title challenger Jamie Conlan—are retired, which suggests either the website has not been updated in some time or the company no longer plays an active role in the sport.

The designation by the Treasury department means that all properties and parties in the U.S. “must be blocked and reported to the OFAC.” The intention of the sanctions in place “are intended to bring about a positive change of behavior” and are not meant to be permanent, though entirely dependent on designated parties cleaning up their act.

It does put Kinahan under a microscope should he attempt to do business of any kind in the U.S., boxing or otherwise. Several athletes, promoters and even media outlets have direct ties with Kinahan, though such relationships figure to drastically change in the wake of actions taken by the Treasury.

The U.S. is one of at least two nations to officially recognize Kinahan as a criminal figure. The high-powered, behind-the-scenes boxing advisor was previously named in the Irish High Court in 2018 as having a controlling and managing role in the KOCG.