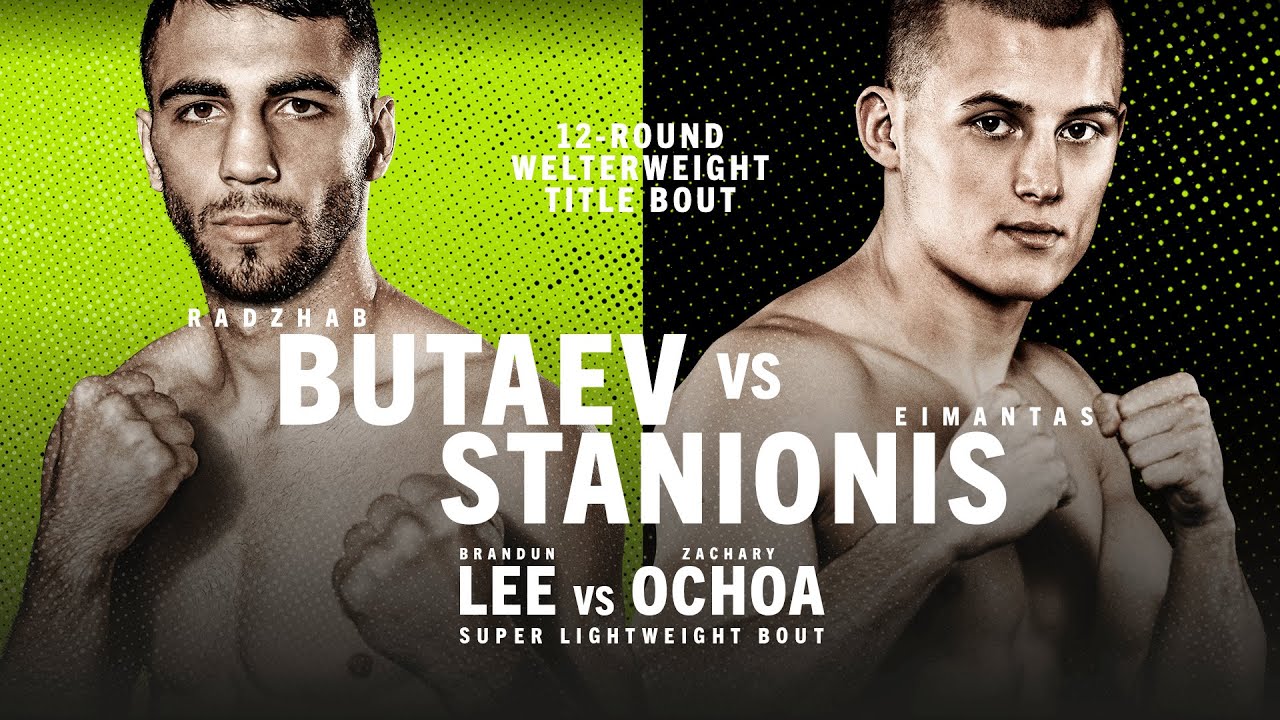 Eimantas Stanionis moved a step closer to establishing himself as one of the sport’s best welterweights with an action-filled split decision win against the rugged Radzhab Butaev, lifting his WBA title in the main event of a special edition of SHOWTIME CHAMPIONSHIP BOXING that preceded the four-fight Spence vs. Ugas SHOWTIME PPV® from AT&T Stadium in Arlington, Texas.

In a bout fought at close range, Stanionis landed the crisper, more eye-catching shots, repeatedly rocking the sturdy Butaev with hard rights and a reliable jab in the most complete performance of his career. He won by judges’ scores of 116-111, 117-110 and 113-114, improving to 14-0 with 9 knockouts, while Butaev, who had a point deducted in the 11th for holding and hitting, suffered the first defeat of his career, dropping to 14-1 with 11 knockouts.

“I still can’t believe it,” Stanionis said afterward. “It was a dream come true to hear ‘and the new.’ When I was a kid, I visualized what this would look like and how it would feel to become a champion. It’s because of the hard work, dedication, belief in myself and my team to get me to this big stage. I just want to tell everybody that dreams do come true. If you believe in it and give your everything, it will happen.”

Displaying a granite chin and impressive punch selection, Stanionis, a 27-year-old former Olympian from Lithuania, made his case for securing a fight with the winner of Saturday’s main event between IBF/WBC welterweight champion Errol Spence Jr. and WBA champion Yordenis Ugas.

“The fight went like this because the referee allowed Stanionis to fight with his head down the entire time,” Butaev said. “What can I do if the guy is leading with his head down all the time? I don’t know why he took away a point from me. They should have taken the point away from him because he was diving in the whole time.”

Butaev tried to mix up his attack, switching from southpaw to orthodox, but Stanionis had little trouble solving these different looks.

Stanionis landed a looping overhand right that landed flush in the tenth. But Butaev appeared to buckle Stanionis in the 11th and bloody his nose with a series of blows.

However, moments later Butaev was deducted a point for pushing Stanionis’ head down in a clinch and punching, blunting his momentum.

Butaev made a stand in the last two rounds, pushing Stanionis back with punishing shots but it was Stanionis who, seemingly tiring, answered with two sweeping right hands in the final minute, as the crowd cheered on the action.

The match ended with both men falling to the canvas, winging shots, an appropriate coda to an entertaining brawl.

In the telecast opener, rising star Brandun Lee didn’t stop his opponent, but he did remain undefeated, beating a very defensive Zachary Ochoa in a super lightweight bout via unanimous decision to move to 25-0 with 22 knockouts.

Entering the bout, Lee had stopped his previous 15 straight opponents, demonstrating the concussive power that has made him one of the most talked about young fighters in the sport.

The 22-year-old Lee never landed a fight-ending bomb against Ochoa, but he did push the action and land the more telling punches against an opponent who moved backward for most of the bout and was determined not to get knocked out.

Lee, who was Ring Magazine’s Prospect of the Year in 2021, went 10 rounds for the first time in his career, winning by scores of 99-91, 99-91 and 98-92, and going the distance for the first time since 2018 in a performance that Lee will surely learn from moving forward.

“I think that only two rounds were close, the seventh and maybe the ninth,” Lee said. “It was exactly what I expected. Perhaps I could have performed better, my combinations been a bit sharper, but it was a good fight overall. Fighting at AT&T Stadium was a blessing. Wow, what an experience. It motivates me even more to come back here and be a headliner one day. I want to be a world champion at 140, unify titles, become undisputed and then become a world champ at 147.”

Lee of La Quinta, Calif., landed 31% of his power punches and 18% of his total punches, according to CompuBox. Lee pinned Ochoa (21-3, 7 KOs) against the ropes in the third and rained down rights and lefts as Ochoa did his best to avoid any fight-ending blows. Ochoa landed a nice left-right combination in the fourth, but Lee closed the round well, landing uppercuts and rights to push Ochoa back.

Lee bloodied Ochoa’s nose in the fifth with a right uppercut as Ochoa continued to move backwards but the action was sparce after that. Lee showed his frustration as the seventh closed, looking at Ochoa with annoyance as he walked back to the corner.

At the urging of his trainer, Brooklyn’s Ochoa stopped moving and started to trade shots on the inside with Lee in the ninth. Lee capitalized, landing a series of nice uppercuts and an overhand right, showcasing impressive hand speed. Ochoa’s face showed the results with swelling under his left eye. Ochoa’s finest moment came in the tenth when he landed a clean overhand right, but Lee took it well and fired back with his own shots.

“Brandun Lee is a really good fighter, a strong fighter,” Ochoa said. “I feel I was doing really well. He caught me a little bit, but I kept my confidence, my poise and when it was time to step it up the last three rounds, I started putting the pressure on him and we went at it. I went all out. He’s never had it like that. I only got hurt one time, maybe at the end of the seventh. I know I buzzed him too.”

The event was promoted by TGB Promotions and Man Down Promotions.