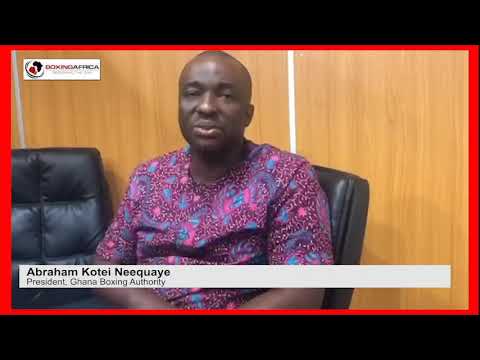 It’s been two months since Abraham Kotei Neequaye and his new board members took over the leadership of the Ghana Boxing Authority (GBA).

Neequaye has been busy laying out his vision for the sport in Ghana after taking the reins from prior president Peter Zwennes. That includes what he describe as the new phase of GBA where he focuses on the welfare of boxers and trainers.

BoxingAfrica.com caught up with Neequaye in an exclusive interview at his office in the Bukom Boxing Arena in Accra. The new president discusses his appointment of Peter Kahn as International Ambassador, other initiatives and more in the video and transcript below:

How has new role been so far?

AKN: It has been very good so far. We just came in but we are looking at continuing from where the previous administration ended. There has been a little challenge but we are doing everything possible to ensure we stay focus.

How about the challenges – what are the biggest challenges you’ve encountered so far?

AKN: There hasn’t been any biggest challenge. We are just trying to improve on some of the things the past regime started before instituting our own vision.

You know in executing ideas there are things that you will face, but in all we are on course to deliver what we promised the stakeholders.

What have been the biggest surprises so far in this new role?

AKN: We haven’t really had any surprises because I have been part of the previous administration so I knew about what I was signing up for the moment I decided to contest for the position.

Based on what you’ve seen thus far, what are some things that the prior regime implemented that you think are good or would like to continue?

AKN: Having been part of the start of the ‘Bukom Fist of Fury,’ I can boldly tell you that it is something that I will continue because it if it can help produce an Olympic bronze medalist like Samuel Takyi then we have to take it seriously.

We also have a responsibility to make sure fighters remain active in the country and the ‘Fist of Fury’ provides that for our professionals.

AKN: There are so many changes to be made to sanitize our sport but I don’t want to pinpoint any specific one because we are looking at tackling them as we move.

Let’s talk about you – when did you first become a boxing fan?

AKN: I was 11 years old when I started following the sport at the National Fire Service Training Centre at Jamestown in Accra. At the time, there was this coach that I admired so much so I used to watch him train fighters a lot.

Who were some of your favorite fighters at the time?

AKN: I did not have any specific boxer that I admired at the time because I was very young and just enjoyed watching them train.

How did you get involved with the sport?

AKN: My involvement with boxing started when I became a gym instructor at the Will Power Boxing Club at Jamestown. The late boxer and trainer Napoleon Tagoe gave me that opportunity and through that I worked with so many fighters and trainers which got me into the sport full time.

What happened after getting involved with boxing?

AKN: I started at the amateurs and became the Greater Accra Amateur Boxing chairman for four years and then entered in management.

I have managed several big name boxers in the country such as Bukom Banku, Michael ‘One Bullet’ Ansah, and Emmanuel ‘Gameboy’ Tagoe among others in the professional ranks.

That gave me the chance to become the second vice-president in the previous administration before taking up this new role as president.

What is your vision for Ghana boxing?

AKN: My vision is what I termed the ‘New Face of Ghana Boxing’ and I met my board to discuss what it entails. I don’t want to go into details for now because my Communications Director will come out with all that when the time comes

But we have already started working and as you can see there is a new office for the president of the GBA, we have bought a vehicle for the association and enrolled 80 boxers on the national health insurance scheme.

There have been rumors of financial misappropriation under your leadership – would you like to address these rumors?

AKN: That is not true because the GBF is a whole national body on its own with its account and president and so I see no reason why their leadership will allow its funds to be diverted into the GBA’s account.

When you talk about Moses Foh-Amoaning, he was part of the marketing team of the Peter Zwennes administration and what I understand is that anyone who brings in sponsorship takes its percentage and that is the job he did for the GBA at that time.

As it stands now, he is no more with the GBA because I haven’t appointed him so I don’t know in which capacity he is referring to the association.

I have heard all about what you are saying but no one has addressed my office with any such thing so I don’t take it seriously. For me as a president, I concentrate on my work and there is no official letter addressed to my office.

Did the past administration leave you enough money to run the GBA?

AKN: I don’t want to go into whether someone left me enough funds or not. My job here is to work to put boxing on the top.

There has been a handing over and I can tell you that the GBA is in good standing to handle its activities and as a president I am going to ensure that we increase the strength of the association.

A lot fight fans are complaining that a lot of Ghana boxing matches are mismatches and many are even fixed. How do you plan to address this?

AKN: I know of this and the current GBA wants to put a stop to it and somebody will say that all over the world there are small shows.

We are looking at it the small shows but we won’t allow it at the main events and we have informed all the promoters about that and nobody is going to give us a bad show.

We now have a desk for promotions so this time around something comes to the Secretary General and then to the head of promotions before getting to my office.

So at least each and everyone will have a comprehensive look at bouts before they are staged so I don’t think we will have such situations again.

Based on what you see, who are the future champions in Ghana?

AKN: Everyone is a potential champion depending on how well we manage them and that is what the GBA is coming in to do this time around.

I told you of a project we are coming up with which we call the ‘Black Fighters.’ We are going to be part of managing the boxers from that initiative so that we make sure our good fighters make it to the top.

How do you plan to raise more capital?

AKN: We are looking at it in a different way by chasing the face of professional boxing in the country by making corporate bodies beneficiaries by sponsoring events.

It is known as the Ghana Black Fighters and this time, whoever sponsors will benefit. Looking back, former Head of State Ignatius Kutu Acheampong did a similar thing by sponsoring our first world champion, D.K Poison.

And then at a certain point when Ghana needed money, they went into the boxer’s purse and helped the situation and this is the model we want to adopt.

We are putting up a very good proposal for corporate bodies and government as well that if you invest into it, you will have returns.

You recently created the role of International Ambassador. What are the duties?

AKN: He is supposed to lead the GBA’s international affairs. For instance, if a Ghanaian has a fight outside the country and no one from the authority can be there, he will step in to represent us.

Why was Peter Kahn selected?

AKN: He is a renowned boxing administrator who has the quality to add so much to our sport here in Ghana. I know his capabilities and I believe he is the best person to represent us outside at the moment.

Isn’t it a conflict of interest for a national governing body to appoint someone who manages boxers into that role?

AKN: I don’t think so because he is not in to take decisions for us but will only represent us when directed to do so. That to me isn’t conflict of interest.

Peter Kahn also advises Emmanuel Tagoe. You also work with Tagoe. Do you think appointing him in this role is ethical?

AKN: We were not only looking at anyone but someone who we can benefit from as well. I have worked with him and I know what he comes on board with so I believe he is the right choice.

Were any Ghanaian expats considered for this role?

AKN: We looked at what we have and decided that Peter Kahn is the best candidate for this role. When you look around outside Ghana, most of Ghanaians in boxing are coaches and I think this role is an administrative one.

Why wouldn’t a Ghanaian be considered for this role?

AKN: Sometimes we shouldn’t always look at only Ghana because it is a national body because we couldn’t see any Ghanaian outside that stands tall against Peter Kahn.

I am the president and I know what is best for the GBA and I think I must be allowed to make my appointments.

What legacy do you want to leave after your four-year tenure?

AKN: All I can say is that I am working hard with my board members to ensure I leave a good legacy for all boxing stakeholders in the country.