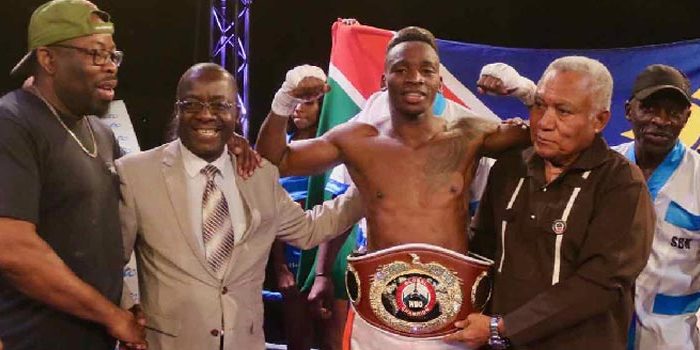 Jeremiah Nakathila and his team praised the WBO’s decision to sanctioning an interim title fight between him and Shakur Stevenson.

The two top-rated contenders will headline a show promoted by Top Rank on June 12 at the Virgin Hotels Las Vegas, in Las Vegas, Nevada.

As it has been well-reported by BoxingScene.com, the WBO decided to offer the interim title fight after reigning champion Jamel Herring chose to hold on to his title following his brilliant victory over Carl Frampton back in April.

The hard-hitting Nakathila (21-1, 17 KOs) and his team have been vocal about their frustration towards the sanctioning organization because of the delay of a title opportunity, which has now understandably transformed into an appreciation with the bout being officially announced.

“Team Nakathila is very excited. Namibia and the African continent is very excited that the opportunity that Nakathila deserved for so long will now finally materialize,” stated the Namibian fighter’s promoter, Nestor Tobias to BoxingScene.com.

“We have been pushing for this fight for over three years and it was of course delayed because [Oscar] Valdez and Stevenson moved up from featherweight and in both instances, they took Nakathila’s spot.”

Tobias refers to a special rule by the WBO that allows its champions to call out and fight instantly a fellow titlist of a different division, jumping ahead of all the contenders of such category. Unfortunately, Nakathila happened to be the victim of this rule on back-to-back occasions when Oscar Valdez and later Stevenson (15-0, 8 KOs) himself abandoned the 126-pound version of the World Boxing Organization title and targeted the belt one division north.

The Namibians, though, waited for their turn, and now looks to make the most of it come fight night.

“It is Jeremiah’s time to shine now, and we finally have an opportunity to show the world what we have in store for them, a fighter that will dominate this division for a very long time,” Tobias said.

“I am really excited about the opportunity. You know I have been waiting for years to finally get this opportunity, but I am happy that we are where we are now, and I will make the most of this opportunity. Every boxer’s dream to fight at the highest level in boxing. I have come full circle from amateur level and have proven myself worthy of a world title opportunity,” described Nakathila.

The always confident Namibian promoter believes his fighter has what it takes to give a great performance despite being the underdog against Stevenson.

“We know exactly how we will take care of him come June 12. This will be an explosive fight for as long as it lasts, and we hope to give boxing fans the fight they deserve. We have always gone into big fights as underdogs, and it is a position we enjoy until after the fight.”