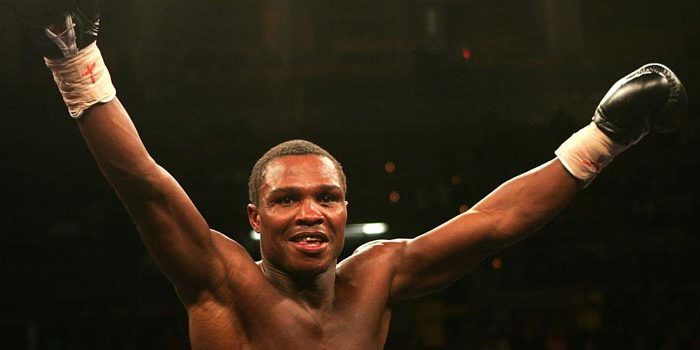 It’s been nearly 14 years since Issifu “Ike” Quartey last fought professionally. Yet the memories of his ring exploits are as strong as the jab that made him a star.

Quartey committed 18 years of his life to boxing. He became a household name among fight fans worldwide, carrying the torch of Ghana boxing that was left behind by Azumah Nelson.

Born on November 27, 1969, as the last of 27 children, Quartey was destined to be a fighter. His father, Robert Mustafa, was a court bailiff and respected street fighter. Ike’s half-brother Clement won silver in the 1960 Rome Olympics, becoming the first Ghanaian to ever medal in Olympic games.

Quartey was only eight-years-old when he began frequenting the renowned Akotoku Academy Boxing Gym. There, he connected with his life-long trainer, Daniel Oko Odamtten. Quartey went 50-4 as an amateur and represented Ghana at the 1988 Summer Olympics in Seoul, South Korea.

Quartey’s record was unblemished until a disputed majority draw to Jose Luis Lopez in October 1997. Then he was on the wrong end of a controversial split decision to house favorite Oscar De La Hoya in February 1999.

In April 2000, following a points loss to Fernando Vargas, Quartey retired abruptly at age 30. He remained out of the ring until January 2005, when he began a remarkable comeback that included impressive wins over Verno Phillips and Carlos Bojorquez, and a shocking, controversial decision loss to Vernon Forrest in August 2006.

The taste of the defeat—and the other disputed outcomes—left a sour taste in Quartey’s mouth. Following a points loss to Ronald “Winky” Wright in December 2006, he retired again—this time for good.

“Those moments were very bad for me because I was trying to comeback after losing my title in a bizarre manner after the Jose Luis Lopez fight,” Quartey said during a recent sit-down with BoxingAfrica.com.

“For instance, in the Forrest fight, I had everyone at ringside scoring in my favor only for the judges to announce him as the winner to my surprise.

“I don’t think Wright hurt me in our fight and I think I did a lot to merit victory but it wasn’t given. At this point, I felt my career was over.”

Over, but not forgotten. Here’s a look at Quartey’s most memorable moments in the ring, recalled by the champ himself:

Quartey had relocated to France two years earlier in a bid to land a shot at Espana’s title. He fought and won six times in the country before receiving that opportunity.

“I went through hell to prepare for that particular fight,” said Quartey. “He was a great fighter and I needed to be in top shape to snatch the title from him.”

Team Quartey, spearheaded by trainer Odamtten, outlined a plan that included firing more power punches and overwhelming the long-armed Espana, who liked to fight at a distance. Quartey then went out and executed it to perfection—except for one hairy moment in the seventh.

“That was the only round that Espana won. He caught me with a clean uppercut which nearly ended the bout but I quickly came back stronger,” said Quartey.

“After the 10th, I remember telling my corner that Espana was weakening so I needed to take my chance when the bell rang again.”

Quartey unloaded a volley of power punches, capped by a right cross that sent the Venezuelan sagging to the canvas. A star was born in Ghana boxing.

“I was more than happy because it has always been a dream to be a world champion,” said Quartey. “My win ended Espana’s career because he fought only once more due to complications he suffered from our fight.”

Quartey was a victim of boxing politics even prior to the De La Hoya bout. First came a decision win over Jose Luis Lopez in October 1997 that was overturned to a draw only two days later. Then in 1998, the Ghanaian was stripped for failing to make a mandatory defense as he pursued a big-time bout.

Or so he thought.

“I was preparing feverishly for the fight and I was in good shape but a month to the fight, Top Rank postponed the bout over an injury to De La Hoya,” Quartey recalled.

“Not knowing, they were sending spies to our camp and they realized I could stop Oscar so they gave me $100,000 for postponing the fight and I came back to Ghana for Christmas.”

The extra time dulled Quartey’s sharpness. Still, they fought on even terms until early in the sixth, when De La Hoya floored Quartey with his trademark left hook.

Quartey quickly rose. Moments later, he returned the favor with a counter hook of his own. From then on, Quartey took control, working behind the jab and scoring heavy shots, including a monstrous right in the ninth.

But De La Hoya came out roaring in the 12th, dropping Quartey again and battering him to the point of a stoppage. “Bazooka” remained upright but would lose a 12-round split decision many felt should have gone his way.

“You can’t judge a fight by a round. He won the final round but I never stopped throwing back and the worst could have been a draw,” Quartey declared.

“I know I won that fight and I always say that Oscar cannot beat me fairly in any bout. They just gave him the verdict but he knows that I defeated him.”

At Stake: 10 Round Welterweight Contest

America’s Kelcie Banks was a dangerous fighter and an amateur boxing legend. A 22-year-old Quartey was a heavy underdog.

“Kelcie Banks remains one of the fiercest fighters I ever fought throughout my career,” said Quartey. “I remember how slick he was during our bout in California.

“I had to put in every effort to win that fight because it was my first in America. He was a very good fighter who troubled me right from the start of the bout.”

Quartey proved to be the better fighter, stopping Banks in seven.

“It was an emphatic victory for me at the time because the fight came as my American debut. I was glad that with all his achievements as an amateur, I ended his career with that knockout win,” said Quartey.

Jose Louis Lopez was a feared boxer who few dared fight in his prime. Lopez proved his mettle when he obliterated fellow Mexican and future world champion Luis Ramon “Yori Boy” Campas in five rounds back in 1996.

Lopez possessed quick hands, lethal power in both hands and an iron chin. His commitment to the sport was questionable but in preparation for Quartey, he left no stone unturned.

If Lopez had a great camp, Quartey’s couldn’t have been worse.

“I wasn’t supposed to fight because I had malaria throughout camp,” said Quartey. “My promoters and trainers wanted to cancel the bout but I refused because I wanted to silence everyone in America.”

Due to Quartey’s condition, Odamtten planned that Ike use the jab judiciously and avoid exchanges with Lopez. Quartey set a CompuBox record with 313 jabs landed that night.

But Lopez had his moments, landing a powerful right in the second that caused Quartey’s gloves to touch the canvas which was ruled a knockdown.

In the 11th, Lopez seriously hurt and dropped Quartey with another right. The champion did well to hang on and win what was announced as a majority decision.

Two days later, the result was changed to a draw after a tallying error was discovered.

“It was a bad time for me because I won the fight,” said Quartey. “The news came to me as a shock because everyone at ringside knew that I controlled the fight.

“I was really hurt because I had to go through a lot to win a fight in that condition only to be deprived of a win at the end.”