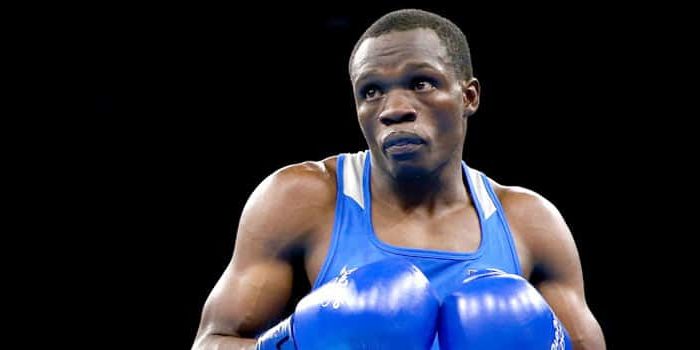 After he snubbed a chance offered by Kenya Professional Boxing Commission (KPBC) to take part in World Boxing Council fights to give preference to the 2020 Tokyo Olympic qualification, Okwiri looks determined to realize his dreams.

And despite the Covid-19 pandemic, he has stepped up his training sessions to boost his chances to national boxing team to Paris for the global qualifiers – once World Health Organisation (WHO) gives green light on the resumption of sports activities.

Okwiri said he resumed training four weeks ago when boxers from Kenya Prisons Service were released to train and regain fitness. This came after President Uhuru Kenyatta lifted a ban on travel restrictions.

“As a professional boxer, things are not so tough. I am used to challenges. But team training is always the best,” said Okwiri.

David Kiilu, his coach, has taken him through the paces in the last four weeks.

“The coaches have given me a programme to follow. I hope to be selected into the squad,” he said.

Okwiri trains twice a day. He goes for a morning run before attending the strength and conditioning sessions in the afternoon.

Okwiri is a seasoned boxer, who adheres to strict training regimen.

He expects stiff challenge from boxers from Russia, Kazakhstan and Cuba in the world Olympic campaign.

“I should have qualified for the Olympics but was denied in Dakar in a quarter final match against Ugandan Emmanuel Ssemuji, who lost in the semifinals. If given another chance, things will be different,” he said.

Since he made his debut to Hit Squad in 2006, Okwiri has been a consistent member of the national team in what makes him the longest serving in the squad.

“That motivates me a lot. It puts me in good fighting spirit during major championships,” he said.

National assistant head coach David Munuhe said they keep close tabs on players who were named to the provisional squad selected in Kisumu in November.

“Any of them can make the team. There is need to keep a close contact with them,” said Munuhe.

Meanwhile, British boxing legend Ricky Hatton has hailed his friend Tyson Fury, expressing his pride at the way the heavyweight champion turned his life around.