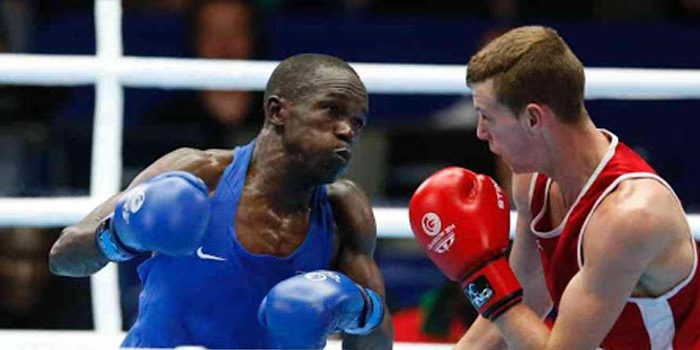 Tokyo Olympics-bound boxer Nicholas ‘Commander’ Okoth could be the only Kenyan pugilist to have qualified so far for the world’s biggest sporting extravaganza.

While Okoth has been in the limelight for years, even representing the country at the 2008 Beijing Olympics, not many are aware that he comes from a family of kids gifted with dazzling boxing skills.

His brothers Absalom ‘Diblo’ Okinyi, Steve Omondi and Paul ‘Polipo’ Ouma as well as first cousin Edwin ‘Ocox’ Okongo (a Senior Private at Moi Air Base) are also boxers in their own right having donned the national team ‘Hit Squad’ colours on various occasions.

They all possess swift and solid punching ability and their passion and enthusiasm of the sport that has changed their lives is immeasurable.

What’s more? They savour resilience, fighting spirit and considerable amounts of commitment which speak volumes about their success in the ring.

Such are interesting facets of their flair which endear them to their fans countrywide. They all learnt the ropes as residence of Bonde suburb (opposite Moi Airbase) in Nairobi’s sprawling Mathare slums which has produced some of Kenyans finest boxers including celebrated brothers (of yore), Kenneth ‘Valdez’ Ochieng’ and Chris Sande, who bagged silver at the Seoul Olympic Games in 1988.

“Bonde was then notorious for street bullies and to survive there, you had to be tough, hence the need to jab even more. But all in all, boxing has been our life and passion and a sport which transformed our lives and enabled us traverse the globe,” Okinyi, a Police Constable based at Baringo South Director of Criminal Investigations office, said.

Okinyi, Okoth, their cousin Okongo and his two brothers are all products of the famous St. Teresa’s Undugu Amateur Boxing Club at Eastleigh Section One where they realised their boxing potential under the tutelage of current national team coach Benjamin Musa and Valdez, who played for Kenya and savoured semi-pro boxing in Denmark.

Boxers from Bonde made up the biggest chunk of St Teresa’s production line. The four brothers are all orthodox boxers.

However, the similarities end there.

While the eldest Okinyi and second-born Ouma have retired, Okoth, Omondi ­— the youngest of the four brothers — as well as Okongo are still active.

Okongo turns out for army side Armed Forces Amateur Boxing Association has represented Kenya in various events including 2018 Indian Open and Gold Coast Commonwealth Games, exiting both at the round of 16. He also boxed in the Kenya Open Championships in  2018 and 2019.

Okoth, a Corporal of Kenya Defence Forces (KDF) is currently the finest boxer in the Kenyan squad and the only Olympian in his family.

He also won gold at the African Olympics qualifiers in Namibia in 2008, which qualified him for Beijing Summer Games where, in his debut, lost to Mexican Arturo Santos Reyes in the preliminary rounds.

Born in 1983, Okoth will, alongside Christine Ongare, return to the Olympics in Tokyo 2020 Olympics next year after a 12-year hiatus.

Okinyi retired from the sport in 2008, the same year his brother made his Olympics debut.

He started his career while still in Standard Five and went through requisite junior ranks before joining Undugu at lightweight and later Police side ‘Chafua Chafua’ as a welterweight boxer, where he ruled the roost with exceptional quality of jabs and hooks.

Okinyi, who clinched a silver medal at the 1998 Commonwealth Games in Kuala Lumpur, Malaysia, is regarded as the best boxer in their family, according to boxing doyens.

He also got his mitts on the Africa Zone Five and Brunners Urafiki gold medals, twice lost in the quarters of the All Africa Games in Abuja 2003 and Johannesburg in 1999 and was a longstanding Kenya Open Champion at welterweight and a national team mainstay.

“Diblo is a typical boxer. His technical finesse classified him among the best in his generation. Lightweight Ouma was naturally a slugger with terrific body blows and straight punches. He had height issues, being short and sturdy. Okoth is kind of a pressure boxer who can fight and box at the same time. Weaving, bobbing and ducking, Okoth torments his opponents with incessant punches and has amazing hand speed, by and large, his strong point on the canvas. Steve, on the other hand, is a hard puncher and a fighter,” coach Musa explains.

Ouma hung his gloves in 2003 following a traffic accident near Moi Forces Academy, bringing a promising career to an abrupt end.

He had caught the eye of the then Police coach Patrick ‘Mont’ Waweru, who was contemplating recruiting him at Chafua Chafua.

“The accident happened near Moi Forces Academy where I broke my hand and couldn’t fight anymore. It was such a painful experience mentally, knowing that my career in boxing had come to an excruciating end,” said Ouma.

Ouma won the National Boxing Intermediates in 1999 and went all the way to the Kenya Open in Nakuru, losing in the final to Samson Macharia in a controversial bout. Four years ago, Omondi won the Kenya Novice Championship and represented Nairobi in the Inter-Cities event in Dar es Salaam, Tanzania, losing in the final.

Omondi had a stint at Kenya Prisons after his formative years of play at Undugu.

Okinyi born in 1974 is grateful that sport is helping countless other boys from slums escape poverty. He explains: “I would have been a nobody if I hadn’t realised the potential I had in the sport. I want to thank my mentors Musa and Valdez for their support and advice. It’s through my association in them and involvement in the sport that my brothers followed suit.”

Okinyi has had a burning desire to groom the next generation of boxers in Mathare slums where drug abuse and peer pressure are the order of the day. He, however, fears that his dream to discover the next crop of champions from Mathare may not come to fruition, after all.

“My dream to give back to the youths of Mathare was nipped in the bud three years ago when I got transferred to Marigat, where I have spent three years. But once in a while when I back in Nairobi, I try my best to get together with the youths. I have always wanted to be a good example to the youths where I came from but due to work commitments, it has difficult for me to hack it,” said Okinyi.

Okoth is a Corporal at Kenya Defence Forces (KDF) and has just three more years left before reaching the maximum age of 40 as stipulated by world governing body, AIBA.

This means Tokyo Games will be Okoth’s last Olympics as a boxer.

“I want to nurture the next crop of boxers at KDF. After Tokyo, I aspire joining the coaching arm of our team since rules will bar me from competing as an amateur boxer. But I will hung up my gloves once I feel I can’t jab anymore. It’s a matter of weighing my options and pushing as far as I can. Turning pro isn’t an option.”