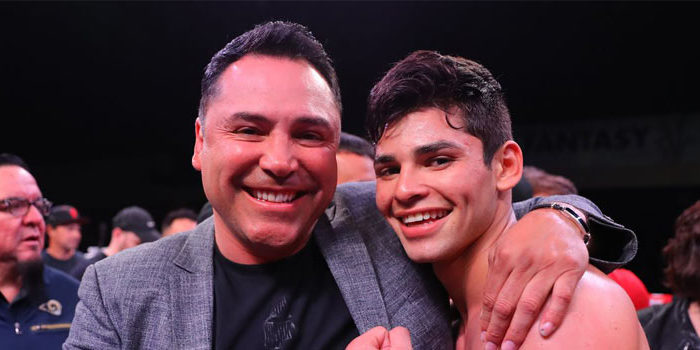 Golden Boy and DAZN will present a special night of boxing on Valentine’s Day as rising star Ryan Garcia (19-0, 16 KOs) defends his WBC Silver Lightweight Title in a 12-round fight against rugged contender Francisco Fonseca (25-2-2, 19. KOs). The event takes place Friday, Feb. 14 at Honda Center in Anaheim, Calif. and will be streamed live exclusively on DAZN.

“Golden Boy is proud to present the biggest rising talent in the sport of boxing,” said Oscar De La Hoya, Chairman and CEO of Golden Boy. “Ryan Garcia silenced all the skeptics by knocking out a tough contender in Romero Duno, and he did it in just one spectacular round. Aside from being a popular young star who is loved by all women, he’s also demonstrated that he’s a skillful fighter with power in both hands. So, we will have something special for everyone to enjoy on Valentine’s Day when we deliver this great show at Honda Center and live on DAZN.”

Garcia is a 21-year-old contender who has quickly developed into one of boxing’s most popular young athletes. After a decorated amateur career, Garcia debuted as a professional and later signed with Golden Boy in 2016. Since then, he’s passed every tough test put in front of him, including wins against “Ruthless”Romero Duno, Carlos “The Solution” Morales and Jason “La Maravilla” Velez. Now, he’ll look to put himself on the path towards the highest levels of the sport with a win at the same venue where Canelo Alvarez became world champion for a first time in 2011.

“I’m very excited to be in the ring once again,” said Ryan Garcia. “I’m looking to shock the world this year. I’m going to show the boxing world that I’m here forever!”

On the other hand, Fonseca represents a recent wave of young talent from Managua, Nicaragua who have recently had much success in the sport. With fighters such as Felix Alvarado and Rene Alvarado becoming world champions within the past 18 months, Fonseca feels inspired to build off that momentum and upset Garcia. The 25-year-old will return after a tough draw against Alex Dilmaghani for a vacant title.

“Nicaraguan boxing is a the very top right now because we have two world champions representing us right now,” said Francisco Fonseca. “That’s why I will not let my country down. When I face Ryan Garcia, I will expose him on his own territory, and I will deliver him his first professional victory. My manager Rosendo Alvarez and I have been waiting for. We’ve dreamed of fighting Ryan Garcia, and we have the antidote to defeat him.”

“From rising stars to crafty veterans, the lightweight division is poised for a huge year in 2020,” said Joseph Markowski, DAZN EVP, North America. “With such an adoring fan base, we couldn’t think of a better fighter than Ryan Garcia to headline this special Valentine’s Day event during Fight Season on DAZN.”

Blair “The Flair” Cobbs (13-0, 9 KOs) of Las Vegas, Nevada will defend his NABF Welterweight Title in a 10-round bout.

Alejandro “PinPon” Reyes (2-0, 2 KOs), a native of Mexicali, Mexico who trains out of Los Angeles’ Westside Boxing Club, will return in a four-round lightweight battle.

Evan Sanchez (6-0, 5 KOs) of Parlier, Calif. will participate in a six-round welterweight bout.

Opponents for the undercard will be announced shortly.

Garcia vs. Fonseca is a 12-round fight for the WBC Silver Lightweight Title presented by Golden Boy. The event is sponsored by Hennessy “Never Stop. Never Settle.” The event will take place Friday, Feb. 14 at Honda Center in Anaheim, California and will be streamed live exclusively on DAZN.