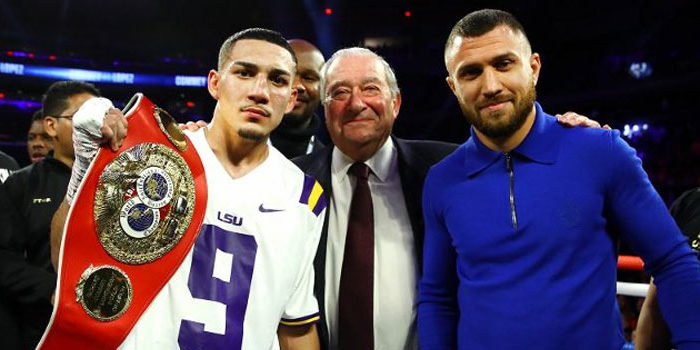 The three-division champion commended Teofimo Lopez for winning a lightweight world title. Lomachenko also acknowledged Lopez’s power, which was on full display during his second-round stoppage of Richard Commey.

Other than that, Lomachenko wasn’t wowed by what Lopez accomplished in what was supposed to be the most difficult fight of the brash Brooklyn boxer’s three-year pro career.

“I’m not impressed because it was just a couple of rounds, and I don’t understand [who else he’s fought],” Lomachenko told a group of reporters at ringside. “He has the power. Of course, he has the power, and he’s a smart fighter. But it depends on the opponents.”

Lomachenko didn’t mention Commey (29-3, 26 KOs), yet he seemingly implied that he still doesn’t think much of any of Lopez’s conquests. Nevertheless, the 22-year-old Lopez became a world champion in just his 15th professional fight by taking the IBF lightweight championship from Commey.

Lopez (15-0, 12 KOs) drilled Commey with a straight right hand that sent the hard-hitting Ghanaian to one knee 40 seconds into the second round. Commey jumped up too quickly from that knockdown and fell down again.

The former champion got up, but he never recovered from that punishing punch. Lopez pounced on him, unloaded an array of power punches and forced referee David Fields to step in and halt the action 1:13 into the second round on the Terence Crawford-Egidjius Kavaliauskas undercard.

The 31-year-old Lomachenko confirmed that he expects to face Lopez next.

“Yes, of course,” Lomachenko said. “We want to [unify] all four titles.”

Ukraine’s Lomachenko (14-1, 10 KOs) owns the WBA and WBO 135-pound crowns. He also is the WBC’s franchise champion within the lightweight division.

“Now he’s the world champion,” Lomachenko said, “and now he’s interesting for me because he has the title. He’s very self-confident.”

When asked if he thinks he can pick apart Lopez due to his ring IQ, unusual athleticism and skill, Lomachenko replied, “Yes, I understand, and I will be prepared for this fight.”

The two-time Olympic gold medalist acknowledged, however, that Lopez’s power could impact their much-discussed showdown.

“Maybe,” Lomachenko said. “This is boxing.”