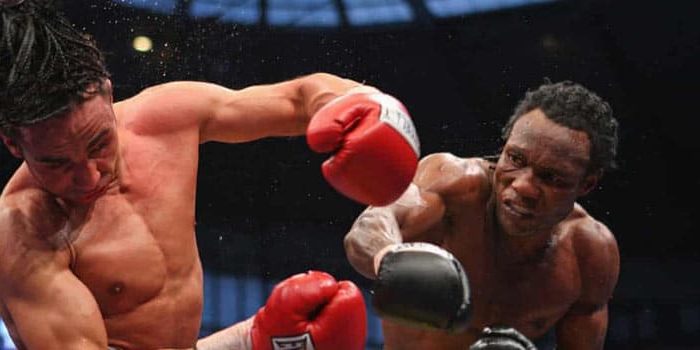 Lovemore Lawyers neighbours a Macedonian bakery, a Fijian grocery store and Polish butcher in the heart of Rockdale, a cosmopolitan suburb of Sydney.

Many of the shops in the area offer tempting tastes of home to immigrants from every corner of the globe. Lovemore N’dou, who won a world title as a boxer and now runs his own law firm in the area, can relate to Rockdale easily. But, for all his success in the ring and the courtroom, N’dou’s thoughts are never too far from Musina, the tiny mining town in South Africa he once called home.

You don’t have to spend long in the company of this articulate and softly spoken lawyer before you realise the brutality he faced as a boy in the Limpopo province during the last days of apartheid. To illustrate the impact the regime had on his life, N’dou only has to lift his left arm. As he raises it, slowly and hesitantly, it makes a sharp crack, like a branch broken on your knee. That arm once propelled a razor-sharp jab, but it was damaged long before he fought for boxing titles – all because a white girl showed an interest in him at his local grocery in Musina.

“I grew up at the end of apartheid, at a time of deep tension,” he says. “Where we lived in Musina, there was a grocery store owned by a white gentleman – as black people we couldn’t own our own businesses. I used to go there and buy things and the man’s daughter used to work at the till. She always insisted I go to pay with her. I never thought much of it but the other black people who worked there told me: ‘Lovemore, she likes you.’ I knew it was impossible. A black boy and a white girl in apartheid: forget it.”

N’dou and the grocer’s daughter would chat, but that was the height of their interaction. N’dou understood his place in 1980s South Africa very clearly. He couldn’t use the same toilets, beaches or buses as his white teammates on state boxing teams. He trod as carefully in life as he did in the ring, using his intellect to out-think opponents and avoid vicious physical punishment. He knew from an early age that his only escape from South Africa was boxing, so he trained hard in the gym at the local mine.

“I was always courteous, but there was never anything else between me and this girl. There just couldn’t be. Anyway, eventually, the girl’s father finds out she likes me. The police knocked on my door, sorry, they kicked it in. I was put into prison for 90 days under a law that was there to put political activists in. When I got out, I was sentenced to six cuts of the lash. I still have the scars. The police were calling me names, calling me ‘kaffir’ and that’s when I got mad. I spat at the policeman, the stupidest decision I ever made. They set the dog on me, giving me this scar. They beat me, breaking my left arm badly. By the end of my career against Canelo, I was fighting with one arm due to injuries sustained that day. It was just worn out.”

N’dou’s injuries stayed with him his whole career but so did his resolve for justice. He understood early in his boxing career that his ability to hurt his opponents was never in question, but he often lost fights on decision given by white judges. N’dou saw a lot of injustice growing up. When he was selected to represent his state boxing team, he and his black teammates had to travel in the back of a cold truck while his white teammates rode in the comfort of a bus. N’dou wrote countless letters to the authorities outlining the rights of his teammates. Eventually conditions improved and his vocation in life was set.

After 11 victories in his first 12 fights as a professional, N’dou travelled to Australia in 1995 to fight Cliff Sarmardin in the coastal city of Newcastle. He lost on points, but the experience changed his life forever. “I was making very little money boxing in South Africa and knew that, even after apartheid, my future lay elsewhere in terms of opportunities for my family. I boxed in Newcastle and, even though I lost, the people – white people – actually cheered my performance. I had never experienced anything like it. I knew then that I had to come and make my life in Australia.”

N’dou settled in Australia and built a respectable career as a professional. In 2003, he decided to juggle his boxing career with a degree in law and communications at the University of Western Sydney. Even though he had been denied schooling until the age of nine, he had studied hard. motivated by his passion for justice. If anything, boxing reinforced his belief that the world needs fixing.

“Boxing is a brutal sport,” he says. “Often you’re only good to people when you are making money. It can be like the relationship between a hooker and their client. A transaction takes place and, so long as there is money, everything is good. But as soon as there is no money, that relationship is over. Watch when a boxer loses, where do his trainer and manager go. I wanted to use my legal training to make a difference.”

One year into this degree, he travelled to the MGM Grand in Las Vegas to face Miguel Cotto, the Puerto Rican fighter who won world titles at four weights. N’dou remembers travelling through US customs and being asked why he had such heavy luggage. The officials assumed he was carrying boxing equipment but N’dou opened his bags to reveal legal textbooks.

He lost that fight to Cotto on points but eventually won the vacant IBF world welterweight title in Sydney against Naoufel Ben Rabeh. Ultimately, though, he wanted to leave a legacy in the courtroom rather than the ring. He kept studying, earning master’s degrees in criminal prosecutions, human rights and family law – all while continuing his professional career.

“Growing up in small shack, things were never easy, but I always valued education so dearly. In boxing, there will always be someone better. Even if you become a world champion, you might get beaten or become too old. There’s always someone next in line. With my education and study from university, you cannot take that knowledge away from me ever. I have that for life.”

N’dou’s faced a young and hungry Canelo Álvarez in Mexico in his penultimate fight, losing on points. At 39, he had achieved everything he wanted in the ring and his focus shifted towards setting up a legal practice in Sydney. Today, N’dou runs a successful and busy family law practice and is about to start studying for his PhD in law at the University of Sydney. Although his ultimate ambitions do no lie in the manicured lawns and quads of the university. He has his sights set on home.

“I want to go back to South Africa to go into politics. The country is slowly turning into anarchy and I do not believe the current leaders are doing enough to help the ordinary person. It’s been over 20 years since the end of apartheid and I am not happy. I think we can do better. We need educated people to come home and help. If I die without doing this I won’t rest in peace. I was brought into this world to contribute and I need to do more for South Africa.”