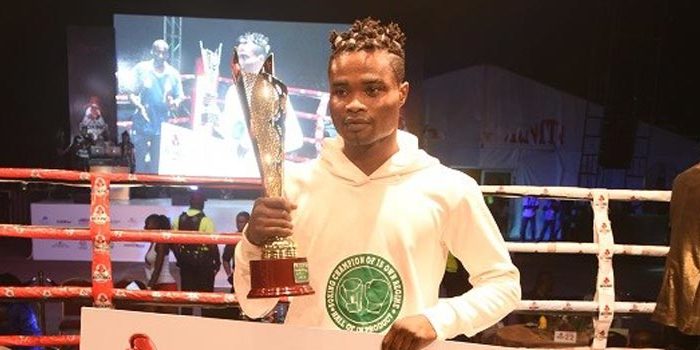 West African Boxing Union (WABU) lightweight champion, Rilwan “Real One” Oladosu, is planning to take his career to the US soon, where he hopes to become another “Sugar” Ray Leonard.

On several occasions, the Oyo State-born pugilist has proven his mantle as one of the most skillful fighters to emerge in Nigeria and Africa’s professional boxing in the lightweight category.

‘Real One,’ as Oladosu is fondly called, is known for his rapid and all-action style whenever he steps into the ring.

He revealed to The Guardian yesterday that he got his inspiration from American legend Ray Charles Leonard, best known as “Sugar” Ray Leonard.

“I got my inspiration from Sugar Ray. I so much love his style and pattern of boxing, and my dream is to become the new Sugar Ray in boxing,” Oladosu stated yesterday.

“Sugar” Ray was part of “The Fabulous Four,” a group of Hall of Fame boxers who fought each other throughout the 1980s. The other members of the group are Roberto Durán, Thomas Hearns and “Marvelous” Marvin Hagler.

“The Fabulous Four” created a wave of popularity in the lower weight classes that kept boxing relevant in the post-Muhammad Ali era. Leonard competed from 1977 to 1997, winning world titles in five weight divisions; the lineal championship in three weight divisions; as well as the undisputed welterweight title. He was also the first boxer to earn more than $100 million in purses and was named “Boxer of the Decade” in the 1980s.

Like the story of Leonard in America, Oladosu has ruled the Nigerian and West African lightweight category for about three years now. Apart from his accolades inside the ring, “Real One” has won the Mojisola Ogunsanya Memorial Trophy for the best boxer at GOtv Boxing Night on two occasions, including the cash prize of N3 million.

His journey into the exciting world of boxing started at a very tender age.

“I was a little boy, when my father started teaching me the various techniques of boxing,” Oladosu revealed in a chat with The Guardian yesterday.

“Then, I had not even started primary school, but my dad would carry me on his shoulder to the boxing gymnasium. My father (Rasheed Oladosu) was a boxer in his youth days, and he is now my coach alongside his brother, coach Titiola,” he stated.

For years, Ajegunle, a Lagos suburb, had been the breeding ground for sports men and women in Nigeria. Oladosu was one of the boxers to emerge from the area.

“I grew up in Mosafejo Amukoko area of Ajegunle, and my father used to organize a competition for amateur boxers every Boxing Day (December 26). I emerged champion in the competition on several occasions, and in my days as amateur boxer, I used to trek from Amukoko to Rowe Park in Yaba to practice and also attend events. Sometimes, I trained without food in my stomach. I took a lot of risk in my days as amateur boxer, and those were some of the things that have contributed to my success story today,” Oladosu stated.

Having conquered all opponents in the West African Boxing Union (WABU) lightweight category, the flamboyant boxer is aiming higher.

Next month, boxing fans in Nigeria and Africa in general will witness a big bout in the GOtv Boxing Night 20, where he will battle for the African Boxing Union title (ABU) title in what has been tagged “Fight of the Decade” between Oladosu and Oto ‘Joe Boy’ Joseph.

Oto “Joe Boy” Joseph, another flamboyant boxer, is the current ABU title holder, while Rilwan “Real One” Oladosu is the challenger.

“I won’t boast before the fight, but all I know is that Oto ‘Joe Boy’ will surrender the belt on that day. I have the power to beat him, and I am going to prove to all Nigerians that I am the best boxer in this part of Africa at the moment. I don’t want people to watch on television. I want all boxing fans in Nigeria to come to the National Stadium in Lagos to be part of history this October. It is going to be a fight that will be the talking point in Africa in many years to come,” Oladosu stated.

Oladosu, who defeated Ghana’s Benjamin Lamptey during GOtv Boxing Night 16, says his target is to become a world-boxing champion soon. “As soon as I beat Oto ‘Joe Boy’ Joseph for the ABU title next month, I will take my boxing career to the United States of America. There are more talented professional boxers in the US, and I hope to join them very soon to continue my professional boxing career. I must commend GOtv for providing a platform for me and other boxers in Nigeria to exhibit our skills.”