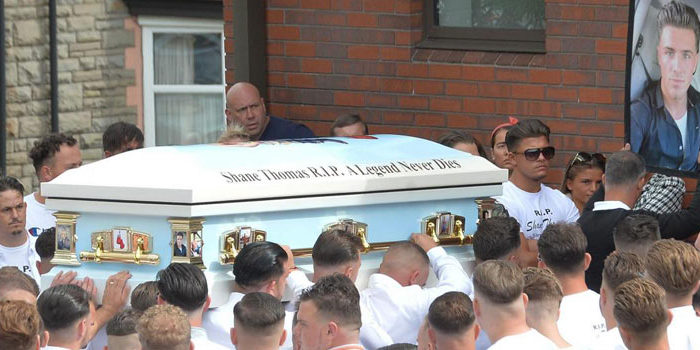 HUNDREDS of mourners paid their final respects to popular amateur boxer Shane Thomas at his funeral in Pontypool.

The 22-year-old died in the Wainfelin area of Pontypool on August 5, when the van he was travelling in hit a parked vehicle.

Almost 1,000 mourners, including members of the traveller community from around the country, gathered for the funeral at Pontymoile Undenominational Christian Mission Church, with Clarence Road being closed by police due to the number of vehicles.

After a service, the cortege headed to Torfaen Warriors Boxing club at Grange Industrial Estate, Llanfrechfa Way, for a short service before he was laid to rest at Llwyncelyn Cemetery in Cwmbran.

During the service at the boxing gym, a plane flew overhead towing a banner reading “Rest In Peace Shane Thomas. A legend never dies.”

Mr Thomas’ coffin was brought into the church on a horse-drawn carriage, followed by his family and close friends in five limousines. The cortege was followed by a convoy of vans displaying huge floral tributes to the former amateur boxing champion.

The service was conducted by Pastor John from Noddfa Baptist Church in Abersychan.

He said: “The word legend can be used too easily at times, but in Shane’s case, I believe there is no word more ﬁtting to describe him.

“Not only was he a hero to many, and loved deeply by his family and traveller community, Shane was also well known by everyone in this valley.

“Shane was a decent young man, his parents raised him right, he was polite and respectful.

“He was an incredibly popular young man, polite and well mannered and always had time for everyone.

“He was a hard working and committed young man, He is a sad loss to our entire community.

“He will always remain in our memories as the legend he truly was.”

During the service, those who couldn’t fit in the church waited outside to pay their respects.

Vijay Joshy said: “He was the nicest person you could ever meet. He always would speak to people, and would always show you respect.”

“He was a fantastic person who had everything going for him,” said Brad Edwards.

“Everyone from the community loved him. He was a true legend. There will never be another one like him.”

Graham Parry, former manager of Pontypool Working Men’s Club, said: “He was a really nice lad. He was respectful, and would always be very polite. He would call me Mr Parry whenever he spoke to me.

“He was well loved by everybody – you can see that from the number of people here to pay their respects to him.”