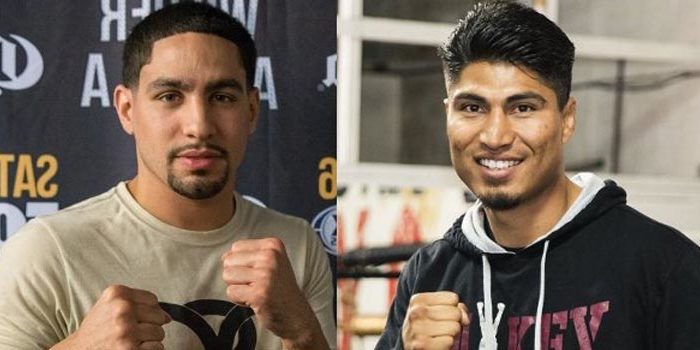 Summertime will belong to the welterweights—and Fox Sports.

The latest development in the 147-pound sweepstakes calls for an all-Garcia pairing between former two-division titlist Danny Garcia and former four-division title claimant Mikey Garcia. The pairing remains in discussion stage, but is being eyed for a late summer Fox Sports Pay-Per-View headliner in Los Angeles, Calif.

Two sources with knowledge of such talks confirmed to BoxingScene.com—on the condition of anonymity, as the bout is not yet finalized—validity of the news development, which was first revealed by Fox Sports boxing insider Mike Coppinger.

As it pertains to welterweights under the Premier Boxing Champions (PBC) umbrella, the pairing makes sense even if the thought of it topping a PPV card has prompted a collective groan among early reaction to the news. All of the welterweight titlists within PBC’s world are committed to summertime fights of their own.

A title unification bout will follow soon thereafter, perhaps as two weeks later as Errol Spence will square off with Shawn Porter at Brooklyn’s Barclays Center. Their two-belt clash will air live on free-to-air Fox, with August 3 as the working date, although PBC scheduling remains fluid.

In that vein, the all-Garcia clash–currently rumored for August 31—could run a little earlier or even more towards mid-September.

Whenever it lands, it makes for an intriguing pairing of former titlists who could otherwise land a title shot anytime they want. Instead, they will likely face each other.

BoxingScene.com’s sources indicated that it was Mikey Garcia (39-1, 30 KOs) whom called for the fight. The California native recently severed all ties with the lightweight division, leaning towards a run at 140 pounds before returning back to welterweight where he was dealt his first loss in a 12-round whitewash at the hands of Spence this past March.

The event resulted in Garcia’s first career loss, but coming in a financially successful venture. The bout topped a Fox Sports PPV card which sold a reported 360,000 units while playing in front of more than 47,000 in attendance at AT&T Stadium in Arlington, Tex.

With all of the relevant 140-pound hardware tied up either in the World Boxing Super Series or by rival platforms (Jose Ramirez tied to ESPN through Top Rank; Maurice Hooker with DAZN through Matchroom Boxing USA), Garcia decided to remain at welterweight for his second straight fight.

It’s not quite a fight that gives him the chance to become a five-division titlist, although a win would put him right back in line for a second crack at such honors.

Danny Garcia (35-2, 21 KOs) was hoping that his knockout win of Adrian Granados—which aired April 20 on Fox—would put him right back in line for a welterweight title fight. The win netted him the WBC silver welterweight title, which was to place him as the leading challenger to Shawn Porter, whom defeated the Philadelphia native in a 12-round decision last September.

Instead, Danny Garcia will risk his place in line against Mikey Garcia, whom is still considered among the pound-for-pound best in the world despite his lopsided loss earlier this year.

The notion of staging such a fight on PPV isn’t ideal, especially when a pairing between their respective conquerors will come free of charge on Fox. It is believed, however that between having the fight take place in Los Angeles—likely at the Staples Center, where both boxers have each won twice—and loading up the undercard will help boost sales.

At the very least, the timing will give PBC brass seven welterweight-themed cards all within the first nine months of 2019. With all fighting relatively close in time to another, it strongly opens the possibility for further unification later in the year or early into 2020.