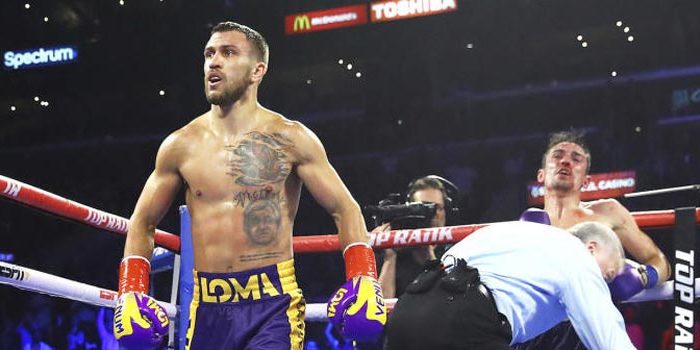 Lomachenko moves to 13-1 (10 KOs) but is in desperate need of a better dance partner. That may have to wait. During the post-fight press conference, Lomachenko said his right hand felt broken. No word on yet on whether he is indeed injured, but that would put him out of commission for a significant period of time.

So where does that leave Lomachenko? Undefeated rising contender Teofimo Lopez sat ringside, hoping to campaign for a shot at the unified champion, but that bout seems unlikely in the near future. Ghana’s Richard Commey was supposed to be Lomachenko’s opponent tonight, but the IBF world lightweight champ suffered a hand injury during his title-winning effort and was sidelined for weeks.

Commey is expected to return to the ring in June. According to his promoter, Lou DiBella of DiBella Promotions, he’ll likely take a voluntary defense first before beginning negotiations with Lomachenko.

Such a bout would be considerably more exciting than this one. Crolla, 34-7-3 (13 KOs), was simply outclassed and had seen better days. He barely threw a punch during the fight. Meanwhile, Lomachenko was sharp as ever. After a slow first, the southpaw from Ukraine began firing off combinations. Crolla had no answers but to retreat and cover up.

Things got worse in the third. Lomachenko continued to batter Crolla. Toward the end of the road, he cornered the fading Brit and unloaded a series of punches that nearly felled him. Referee Jack Reiss issued a standing eight count, ruling that the ropes held him up. The round ended moments later.

The fight did too, not long after that. Lomachenko stalked his weakened foe to begin the fourth. Again, he calmly maneuvered Crolla to the ropes, landing a crunch right hook that caused Crolla to fall face-first to the canvas. Reiss immediately stepped in to halt the action at 0:58 of the fourth.