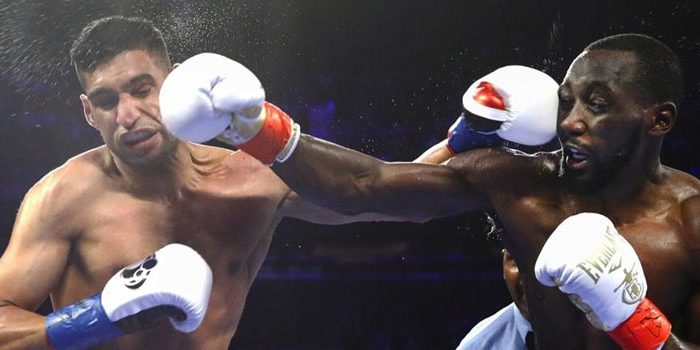 NEW YORK – This wasn’t what Terence Crawford wanted. The unbeaten WBO welterweight champion beat Amir Khan by technical knockout Saturday night, but not in the clean, convincing fashion he sought to do it.

Khan couldn’t continue after Crawford landed what was declared an accidental low blow in the sixth round of their main event of a nine-bout card that drew 14,091 to Madison Square Garden.

Khan initially tried to shake off the pain from Crawford’s low blow in his corner, but he and his trainer, Virgil Hunter, determined that he couldn’t fight on. Referee David Fields thus stopped their scheduled 12-round, 147-pound title fight 47 seconds into the sixth round.

Fields said at ringside after the fight that Hunter stopped it.

Crawford, who dropped Khan in the first round, was ahead on all three scorecards when their fight ended.

“I could tell I was breaking him down,” Crawford said. “It was just a matter of time. I just took my time. I was disappointed the corner stopped the fight in that manner, but Virgil is a great coach and he was looking out for his fighter. I know he didn’t wanna go out like that.”

Crawford called out unbeaten IBF welterweight champ Errol Spence Jr. in the immediate aftermath of his anticlimactic victory over Khan.

“The fight I want next is Errol Spence,” Crawford said. “Whenever he is ready, he can come and get it.”

The 31-year-old Crawford (35-0, 26 KOs), of Omaha, Nebraska, made the second defense of the WBO welterweight title he won last June 9 from Australia’s Jeff Horn. The three-division champion – commonly considered at least one of the top two boxers, pound-for-pound, in the sport – has won six straight bouts by knockout or technical knockout as well.

The 32-year-old Khan (33-5, 20 KOs), of Bolton, England, lost by knockout for the fourth time in his 13-year pro career. Crawford joined Canelo Alvarez, Danny Garcia and Breidis Prescott in the group of fighters who’ve beaten Khan by knockout or technical knockout.

Crawford went off as a 14-1 favorite according to Internet sports books because Khan had fought just two inferior foes since suffering a brutal, sixth-round knockout loss to Alvarez in May 2016. Alvarez knocked Khan unconscious with a crushing right hand.

Khan came back from the Alvarez loss last April 21 to knock out Toronto’s Phil Lo Greco in just 39 seconds in Liverpool, England. Colombia’s Samuel Vargas knocked down Khan in the second round of his following fight, but Khan also floored Vargas twice and comfortably beat him on points in a 12-rounder September 8 in Birmingham, England.

Fields called for a break in the action with 2:1 left in the sixth round because Crawford viciously drilled Khan with a low blow. Khan shook his legs while trying to recover in his corner.

Crawford hammered Khan with a left to the body. Crawford followed up with a straight left to Khan’s head that buckled Khan’s legs.

Crawford connected with a left uppercut late in the fifth, but Khan caught Crawford with a straight right just before the bell sounded to end the fifth.

Khan landed a right hand with about 1:50 to go in the fourth round. Crawford briefly held Khan after Khan hit him with that shot.

With around a minute remaining in the fourth round, Khan complained that Crawford hit him low. Khan’s straight right hand hit Crawford just before the fourth round ended, but not before Crawford connected with a right to Khan’s body and a couple punches to his head.

Khan told trainer Virgil Hunter after the fourth round that he hurt his right hand in the fourth.

Crawford fought the first two rounds exclusively from a right-handed stance. He went southpaw for the first time in the fight with just under two minutes to go in the third round.

Crawford connected with a left and a right just before the third round ended.

If nothing else, Khan got back in the fight temporarily during those second three minutes.

Khan backed up Crawford multiple times in the first round by letting his hands go. Khan connected with two left hands in one of those instances.

With about 30 seconds to go in the first round, an overhand right by Crawford stunned Khan and a short left sent the off-balance challenger to the canvas. Khan quickly reached his feet and moved around enough to survive until the end of the opening round.